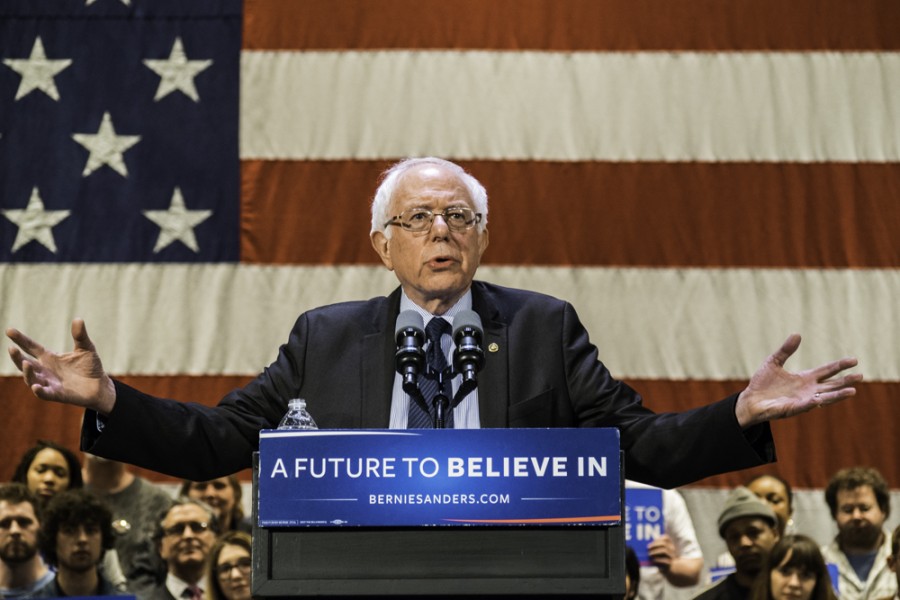 Democratic presidential candidate Bernie Sanders held a rally titled “A Future to Believe In” in Akron yesterday, March 15, at the Akron Civic Theater.

The rally began at around 1 p.m., but many attendees had been in line to hear him speak since 10 a.m. The line started at the doors of the Akron Civic Theater, continued down Main Street, and wrapped around to West State Street. About 1,950 people attended the rally.

One day before the Ohio primary election, Sanders urged everyone to go to the polls and vote. The rally was originally scheduled for The State Theater in Cleveland, but the change in venue provided an opportunity for many UA students to attend.

Senior Love Gwaltney, who attended the rally, said her support for Sanders is unshakable.

“The hope Sanders inspired today allowed complete strangers to hold hands with the person beside them knowing that on some level that person is just like you,” Gwaltney said. “Regardless of skin color, sexuality, gender, or class, we all want one thing, and that’s a voice.”

Ohio State Senator Nina Turner gave the opening remarks for Sanders and received a lot of support from the crowd.

Sanders’ speech centered around the differences between his campaign and Hillary Clinton’s. He also discussed issues he believes Ohioans should be aware of, such as trade policies that affect the job market.

He spent a significant amount of time discussing how campaigns are currently being funded. His campaign has the most individual donations of any campaign to date, the average donation size being $27 at the time of the speech.

“What this campaign is about is doing something very radical in American politics,” Sanders said. “It’s telling the American people the truth.”

Senator Sanders also spoke about providing free education and universal healthcare to Americans, and described issues with the justice system as well as marijuana legalization.

Graduate student Benjamin Knight attended the rally and said, “Sanders is an average American. He doesn’t come from a wealthy family and has not amassed a personal fortune. Throughout the rally, he conveyed his understanding of the struggles the average American faces and discussed his plan to provide a living wage and universal healthcare, as well as a way to fund these issues.”

While there were many who felt “the Bern,” a few in opposition showed up to the rally as well, such as three men who held signs and walked the length of the crowd before the event. Their signs read “Hug a Republican” or “We believe in the constitution.”

CAST YOUR VOTE – To help with voting, Parking & Transportation Services is offering students and faculty free rides to the Summit County Board of Elections today from 10 a.m. to 4 p.m. The shuttle pick-up location is by the bus loop outside the Student Union. You will be asked to show your Zip Card to bus drivers.

You can map your ride with the app Doublemap.