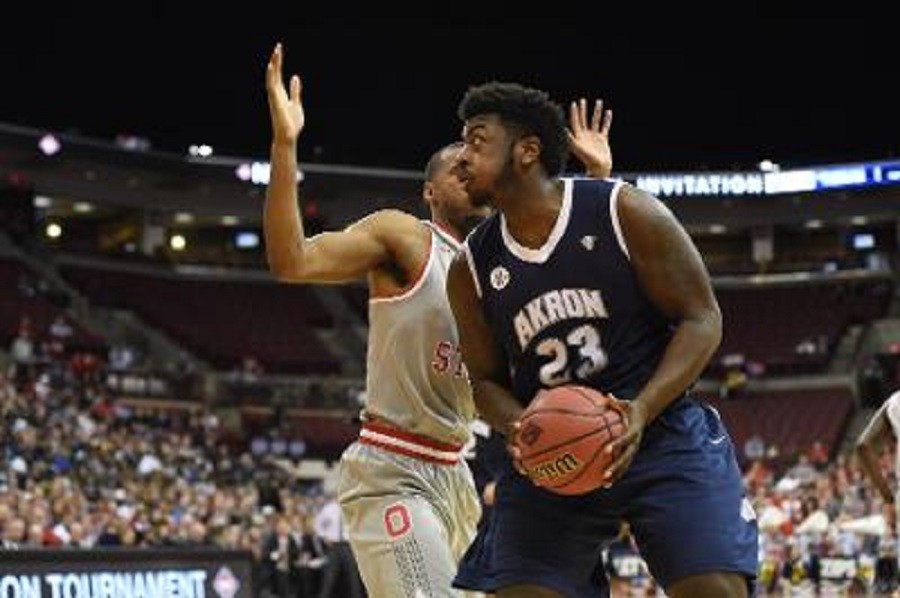 Isaiah Johnson works the inside game against Ohio State

The University of Akron men’s basketball team fell to the Ohio State Buckeyes 72-63 Tuesday night after Ohio State outscored the Zips 10-1 in overtime.

“I give Ohio State a lot of credit,” Akron head coach Keith Dambrot said after the game, “but we didn’t shoot the ball at the free throw line, which ended up costing us.”

The Zips looked calm despite the nationally-televised stage against “The Ohio State University,” and stayed with the Buckeyes for much of the game, which included 12 lead changes in the first half alone. The Zips would lead by as much as seven, but the youthful Ohio State squad seemed to respond every time Akron looked to pull away.

Ohio State’s Marc Loving, Kam Williams and Jaquan Lyle each recorded career-high minutes, with 45, 45 and 44 minutes respectively, while all three tallied 18 points. The game marked the first career start for Williams, replacing Keita Bates-Diop, who was ruled out Tuesday afternoon due to illness.

Both teams struggled getting their shots to fall, with Ohio State shooting just 34 percent. The Zips ended up struggling even more from the field, going 23-70 (32 percent) for the night. Akron was also off on their 3-point shooting all night, going just 9-42. The 42 attempts tied a school record. Reggie McAdams, a career 40 percent 3-point shooter, went just 3-14 (21 percent) from the arc for the Zips.

Despite the struggles from the field, Akron hung in and even held the lead for much of the game.

“It went down to the wire,” Marc Loving said after the game.

The Zips held the ball and a 62-60 lead with 2:20 left in the second half before Zips’ Senior Jake Kretzer threw an inadvertent back court pass to a lurking Jaquan Lyle, who laid it up and in for the final points of regulation. Antino Jackson then missed a step back jumper on the Zips’ final possession, while Lyle’s layup and Mickey Mitchell’s put back attempt rimmed out for Ohio State just before the buzzer sounded.

The Zips could not get shots to fall during overtime. Isaiah Johnson, who finished the game with a double-double of 16 points and 12 rebounds, made just one of six free throw attempts in the overtime period. Ohio State capitalized on the missed opportunities, with Loving and Lyle each scoring four points. Mickey Mitchell then sealed the deal with two free throws.

After the game, Ohio State Coach Thad Matta had some praise for his in-state rivals.

“You see Akron come out there and we said to ourselves ‘we have to be ready to play this game,’” Matta said. He went on to praise the Zips’ floor spacing and 3-point shooting, calling Akron a “really good basketball team.”

Ohio State players Marc Loving and Jaquan Lyle had some other things to say about Akron.

“If we had lost this game it would have been like – dang,” Loving said with a laugh.

“A smaller guy [Antino Jackson] was on me so I felt like he couldn’t guard me. He couldn’t stay in front of me, so I could just get to the rim,” Lyle said.

Keith Dambrot, missing his signature sly smile in his postgame press conference, had some closing remarks on the game.

Ohio State will take on the winner of the Florida-North Florida game, and the loss ends the season for the Zips who finish with a record of 26-9.