Flashback to the 90s 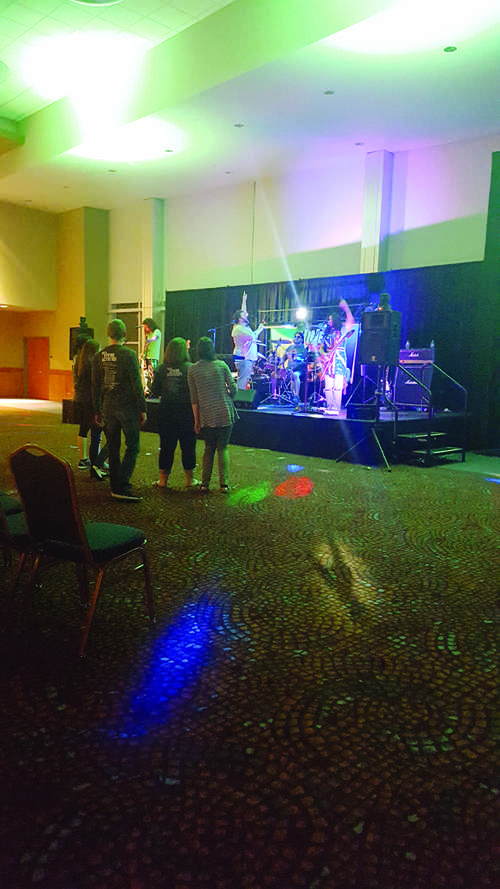 The Nine Deeez Nite band took over the Student Union Ballroom on March 31, entertaining students with pop culture from the 90s. The event started at 8 p.m. and was organized by The University of Akron’s Residence Hall Programming Board (RHPB) with technical assistance from the Zips Programming Network (ZPN).

Celebrating all things 90s, the era-cover band Nine Deeez Nite performs hit music spanning all genres atop a stage complete with light show and props. With a musical catalog that spanned from Christina Aguilera’s “Genie in a Bottle” to Lit’s “My Own Worst Enemy,” there was a little something for everyone.

To the right of the stage, a large projector screen displayed a slideshow of widely-known cultural references from Bart Simpson to the Unabomber. The music and lightshow were enough to motivate the crowd into an impromptu dance routine.

Between songs, the band invited students on stage to test their knowledge of 1990s trivia.

Students selected from several categories, including television, music, movies, and sports. One unlucky participant selected sports, perhaps hoping to tout knowledge of the MLB or Michael Jordan, only to be asked a question pertaining to the WWF (World Wrestling Federation), one of the stranger sports organizations to rise to fame in the 1990s.

Guests also enjoyed some of the finest video games from the 90s.

A mini arcade of a Sega Genesis, Super Nintendo, and the great Nintendo 64 allowed students to play single player or compete against friends, as each console had two controllers. Most played multiplayer games such as Mario Kart (being played on both the Super Nintendo and N64) and the iconic Street Fighter II of Sega Genesis.

The Nine Deeez Nite band was selected by the RHPB under the direction of the organization’s president, Jen Vliet. While attending a National Association for Campus Activities conference, Vliet and the RHPB were exposed to a large variety of acts and entertainment that could be invited to perform at campuses. Vliet chose the Nine Deeez Nite band because it was energetic and fun, and its shows offer more than just music.

While some students at the event were too young to remember anything from the 1990s, they were still able to enjoy a tribute to the decade that produced some of the strangest pop cultural content.