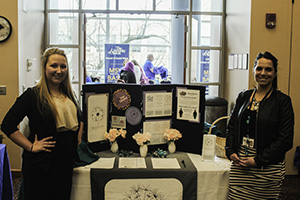 Freshmen through seniors attended, as well as some post-graduates.

“It’s overwhelming because there are so many companies, but it’s really beneficial,” senior Ashleigh Nalty said. “I really encourage students to come to the Career Fair. It’s an opportunity for students to network and sell themselves to employers.”

Students were able to meet new people and learn about companies they may not have known about before.  Widely known companies such as Summa Health System, Goodwill, WVU Medicine, University Hospital, and Western Reserve Hospital were also present.

Senior Alex Pianalto, president of the Student Nurse’s Association, urges all students to research and talk to companies they aren’t already familiar with.

“The Career Fair isn’t just for seniors,” Pianalto said. “There are companies here that are offering jobs that even freshmen and sophomores can do.”

Some professionals noted the qualities they look for in potential employees. Allyson Reed from Hattie Larlham said she looks for “compassion, good work history, a caring personality, and patience.”

Others expressed that it is important for the students to be open, but be careful not to be unprofessional.

Several companies accepted resumes and gave out items with their information on them or candy. Many students walked away carrying bags, flashlights, pens, hand sanitizer, lanyards, and cozies, among other trinkets.