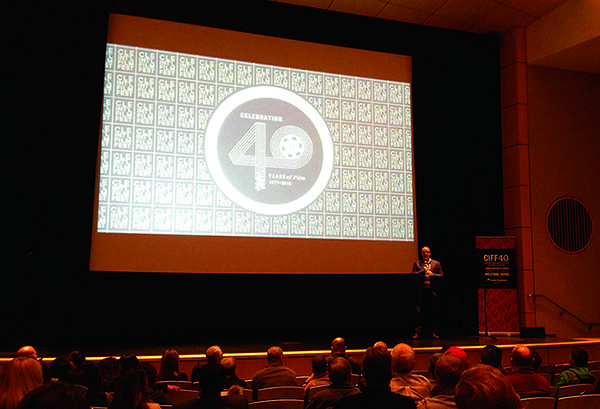 Brian O'Donnell answers questions from the crowd after the viewing

The Knight Foundation worked with community partners Akron Art Museum, Downtown Akron Partnership, The Nightlight, and the Akron-Summit County Public Library to provide support to the festival. The three-day event was called “Knight and Day in Akron” and featured 10 films.

In the library’s auditorium on Friday, 360 guests gathered at 7 p.m. to watch “Akron,” a story of two gay lovers attending The University of Akron whose families share a traumatic past. In the film, the characters, though comfortable being themselves, struggle as tensions rise with their families.

Akron landscapes, urban hotspots, and rural beauty can be seen in the film, capturing the northeastern Ohio spring: cold weather on a sunny day, snow surviving in the shadows. The physical world here parallels the movie’s themes of emotional thawing and self-discovery.

O’Donnell explains that LGBT acceptance is common in larger cities like New York or L.A., but it was necessary to tell the story in a somewhat smaller Ohio city to showcase a “reality that can and should happen [in Akron].”

O’Donnell explained that the city of Akron wanted to help with the project. UA was also supportive of the project’s photography on campus. Other filming locations included Glendale Cemetery in Akron, and a farm in Wooster.

The film concluded to a loud audience applause. After the viewing, O’Donnell took the stage to field questions from the audience. As guests left the auditorium, they were able to rate the movie as it competed against many other in the Film Festival. The celebration continued that evening as viewers were invited to tour some of the nightlife locations from “Akron.”