Away from the main

This week’s Board meeting moved to Wayne College; first time in eight years 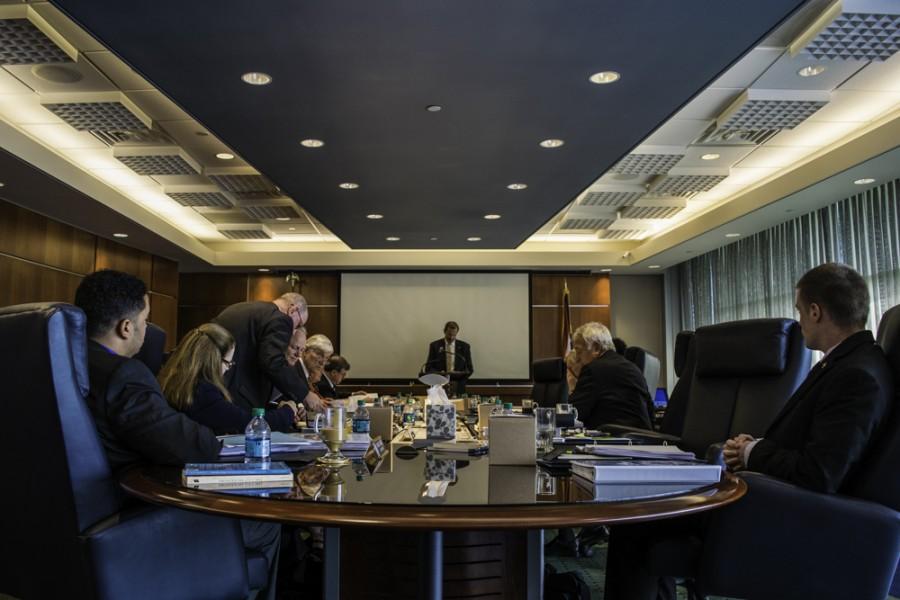 The Board of Trustees held its last meeting on Feb. 10 on the third floor of the Student Union, pictured here.

Not since eight years ago has The University of Akron Board of Trustees held a meeting anywhere other than main campus.

Yet the Board’s next meeting, slated for this Wednesday, April 13 at 10 a.m., will be at UA’s Wayne College, which is a 40-minute drive from downtown Akron. The last time a Board meeting was held at Wayne was on Oct. 8, 2008.

Some students and faculty are suspicious that this action is an attempt to get away from protesters, who have demonstrated outside every Board meeting since last fall after the many cuts to University services at the same time that some unpopular initiatives, including a polytechnic rebranding and the success coach program, were started.

“…it is certainly going to make it harder for those not close to Orrville to get to the meeting,” said UA Special and Early Childhood Education professor Timothy Lillie in an emailed statement, “and that is bound to cut down on the number of students, faculty, staff and alumni who might want to attend.”

Holding Board meetings at Wayne, however, was not always unusual for the University.

According to the Board’s Assistant Secretary Paul Herold, it had meetings at Wayne at least once a year from 1985 to 2008, usually in October.

The reason why the Board stopped having its meetings at Wayne, says Herold, was because of inadequate technology – the Board had just started doing live webcasts of meetings in 2008, and it needed the proper equipment which only main campus could provide.

“This year, [Board Chair Jonathan] Pavloff and others wanted to meet somewhere else, so I scheduled it,” Herold said. “We didn’t do October because things were so contentious here.” He added that since at least last spring the trustees had been talking about moving back to Wayne for a meeting.

Yet the first page of the Board minutes from its last meeting on Feb. 10, 2016, says that its April 13 meeting would be held at main campus on the third floor of the Student Union, and not Wayne.

Further, UA’s website shows that the document containing those minutes had most recently been amended on March 13, but still indicated the April 13 meeting would be on main campus, and not Wayne.

When, then, did the Board decide to move its next meeting to Wayne College?

Neil Sapienza is the associate dean of the College of Arts and Sciences. According to an email Herold sent to him on March 9, 2016, that is when the arrangements to hold the next Board meeting at Wayne began.

Herold says Board members decided on it at their last meeting on Feb. 10, although the decision was not finalized and could not thus be included in the minutes.

The minutes were not amended to reflect this decision because “the only time we do amendments is when something changed at the meeting,” Herold said. And because Pavloff did not say those words – that the next meeting would be at Wayne – the minutes must stand as they are, being the official record of what happens at each Board meeting.

Herold emphasized that the meeting was not moved to Wayne because of protesters, although they were “in the discussion.”

“It wasn’t done because of the protesters, but we were cognizant of them,” Herold said.

“I think that [the Board] is avoiding protesters and controversy that’s on campus,” said Tom Guarino, a UA grad student who has protested at every Board meeting since last fall and on many other occasions. “Based on how the administration has been handling things all year, I think that this just shows more of the same behavior.”

Lillie, who attended the Board’s last meeting on Feb. 10, had a similar sentiment.

“I hope the Trustees will show more clearly that they are thinking of the long haul, and the best future for UA, and not just how to weary out those who have responsibly criticized some of their decisions,” Lillie wrote.

Though it might be inconvenient to drive to Wayne, anyone interested can still watch the public portion of the Board’s meeting live on webcast, accessible through this link: goo.gl/w8HYRH.

In regard to protests, however, the move to Wayne has not slowed them down. One, called “The Walking Wounded,” is planned for tomorrow from 11 a.m. to 1 p.m. outside the Student Union Starbucks entrance. Another is planned for Wednesday, the day of the Board meeting, at Wayne’s campus.

Wednesday’s meeting will be held in the Multipurpose Room in Wayne’s Student Life Building.

Herold says the Board will likely have meetings at Wayne once a year again from here on out.