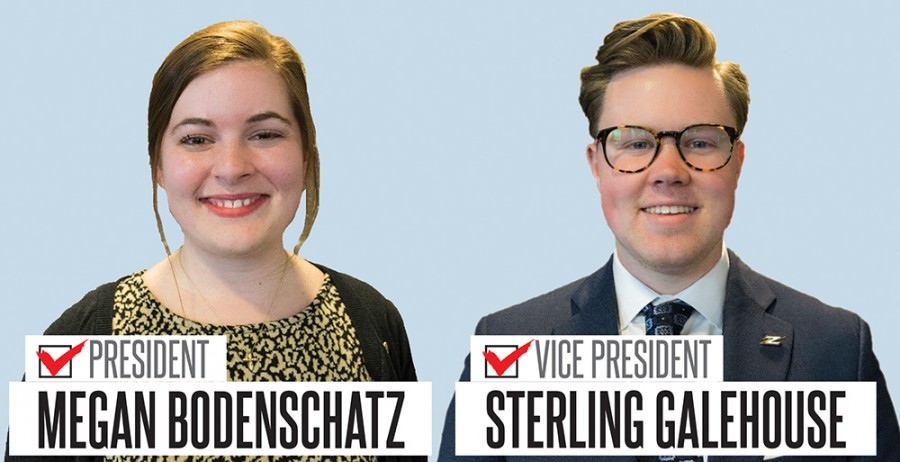 Bodenschatz and her vice president Sterling Galehouse received 57.6 percent of the vote, beating out Isaac Lampner and running-mate Cassaundra Spaeder.

“We are going to hit the ground running by increasing our visibility and availability to listen to what students want to see changed and by continuing to develop positive working relationships with the administration,” Bodenschatz said after the meeting.

Bodenschatz and Galehouse’s term begins May 5, when they will be sworn in at USG’s last 2015-2016 senate meeting.

“Sterling and I are looking forward to furthering our relationship with Dr. Scarborough and his administration team to make effective and positive changes on campus for students,” Bodenschatz said.

She and Galehouse currently work as interns in Buchtel Hall. Galehouse said he will continue working in Scarborough’s office next semester, while Bodenschatz did not confirm whether or not she will continue her internship under Vice President of Advancement Larry Burns.

Board of Elections chair Timothy Hull said this year’s voter turnout of 1,277 is the highest in a decade.

Additionally, 11 senators were elected. The senators, all of whom ran unopposed, include:

University of Akron President Scott Scarborough personally congratulated Bodenschatz and Galehouse at the senate meeting. Undeterred by recent rumors of his potential departure or resignation, Scarborough said he looks forward to working with USG to continue building the University next fall.

Addressing the budget deficit, Scarborough said the University needed to do the “nasty work,” referencing recent cuts, in order to be “in a position to climb again.”

Looking forward, Scarborough wants to round out his management team. After the University completes the second round of the budget process, he said he will be able spend more time with students.

Later, speaking on diversity, Scarborough called the departure of Lee Gill, UA’s chief diversity officer, a “curveball” in the University’s efforts to promote a diverse campus.

Gill has accepted a position at Clemson University.

“Progress will stall if we don’t find a new leader,” Scarborough said.

He also confirmed that the University will continue hiring fewer tenure-track faculty members. A new collective bargaining agreement, signed by UA and the Akron chapter of the American Association of University Professors, gives lecturers the title of Professor of Practice and extends two-year contracts to three, four, or five years.

In his last few minutes, Scarborough stressed the importance of innovation and experimentation.