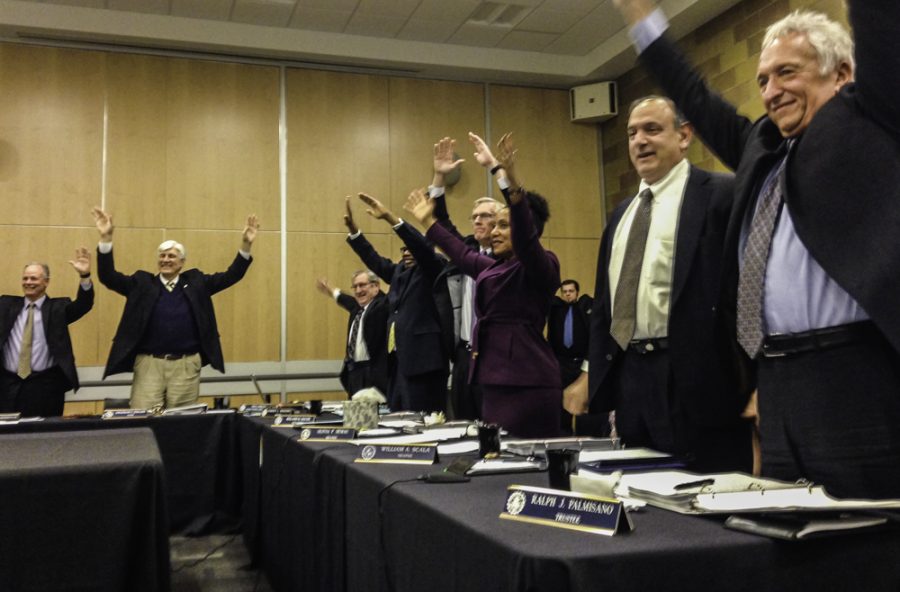 Exercise science student Cindy Hampton was recognized for excellence at yesterday's meeting. During her speech, she fittingly asked Board members and the audience to stand up and stretch their arms for a break. President Scott Scarborough and Board Chair Pavloff are on the left.

Out in Orrville at UA’s Wayne College campus, it was a quiet day for both trustees and protesters.

Yesterday, April 13, was the UA Board of Trustee’s last meeting of spring semester – its first meeting reviving the annual tradition, stopped eight years ago, of meeting at a location off main campus.

The meeting itself, whose public session began around 10:15 a.m. and lasted only until around 10:50 a.m., was filled with routine business, and all agenda items were approved quickly and without opposition.

It was also mentioned multiple times that UA expects to award more than 3,100 degrees this spring, the highest number in five years.

William Scala, one of the two new members of the Board appointed recently by Ohio Governor John Kasich, made his first appearance at yesterday’s meeting. Joe Gingo, the other new appointee, was out of the country and could not make it.

Only a few protesters managed to make the drive to Wayne, which was low compared to the number who have showed up at each Board meeting prior. Outside of Wayne’s Student Life Building, in which the meeting was held, they were given a designated area blocked off by caution tape and cones to yell or chant, visible from inside through large glass windows.

“I want them to have the ability [be loud]. They just can’t disrupt the classrooms inside,” said Wayne College’s police Lt. Chad Cunningham. “So I gave them an area outside.” The taped-off area was not used, however.

Kelsey Watson, head of the Akron chapter of the Ohio Student Association and the small demonstration’s organizer, arrived at Wayne at 7:15 a.m. Around 9:00 a.m., Watson and two others were stopped in the hallway near the Board meeting room, when Wayne College sociology professor Werner Lange unexpectedly invited them into his classroom to explain why they were there and for what they were demonstrating.

After their short presentation, Lange offered extra credit to anyone in his class who would attend or participate in the demonstration at the public session of the Board meeting, slated to start at 10 a.m. Two of the students did, while many others sat nearby but could not stay for the full meeting.

“I knew there were problems, but I didn’t know people were that passionate,” said Adam Vasilatos, a freshman at Wayne studying exercise science who was in Lange’s sociology class. “I didn’t know how serious it was.”

A group composed mostly of the same people held a demonstration outside the Student Union on Tuesday as well, a day before the Board meeting, in which they dressed up as wounded students.
The Board’s next meeting will be on June 15 at 10 a.m. in Student Union room 339.