Keep promises, because you said you would 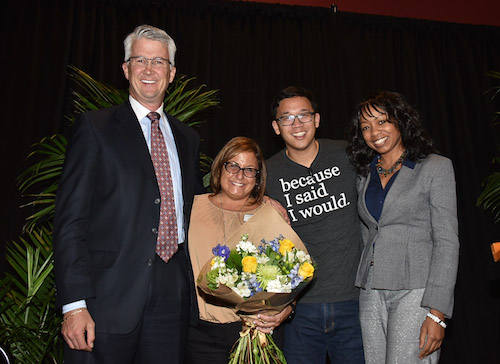 Making promises isn’t difficult, but keeping them is. It’s also what makes a person stand out.

On Tuesday night, a man best known around the world for keeping his own promises and inspiring others to keep theirs came to The University of Akron to share his story.

Alex Sheen, founder of the “Because I said I would” social movement, spoke in the Student Union ballrooms in front of a crowd of about 50 people. His talk was part of the John R. and Sarah A. Adams Honors College Lecture series.

After opening remarks by UA Vice President for Advancement Larry Burns, Honors College Dean Lakeesha Ransom, and Mr. and Mrs. Adams, Sheen began his tale by talking about his father.

Sheen called his father Al, a long-time pharmacist and first-generation immigrant, an average guy – in all respects but one: Al always did what he said he would do.

So, after Al’s long and sometimes hopeful and sometimes hopeless struggle with lung cancer that eventually took his life on Sept. 4, 2012, Alex Sheen knew to what he would dedicate his father’s eulogy: his steadfastness in keeping promises, no matter what.

During that eulogy was the first time Sheen began passing out “promise cards.” These cards are completely blank except for a small uncompleted statement on the bottom right corner of one side, which says “because I said I would.”

He wanted his listeners to write a promise on their cards and to keep them as a reminder of their commitments. For, as Sheen said Tuesday night, “Too often we say things like ‘I’ll get to it’ and ‘tomorrow.’ But one day there is no tomorrow” – a lesson most painfully taught by the trials of his father Al.

That day Sheen made his own promise too. He promised to send 10 of his promise cards to anyone anywhere in the world for free, so that others, too, could start making and keeping their own commitments. This he did, and from that day, what is now the global movement “Because I said I would” began.

Sheen’s nonprofit has sent more than 3.15 million cards to people in more than 153 countries. All of them are sent at no cost to their recipients – all a person has to do is request an order online, and will then receive 10 cards in the mail.

The cards’ function has evolved a bit from the first day on which Sheen passed them out. Instead of serving only as a reminder of a person’s own promises, they are now a sort of exchange. A person writes a promise on the card, gives it to another person or people, and only gets the card back when that promise has been fulfilled.

Through his activity with this movement on social media, Sheen, his story and his mission have gone viral. He made many comments in his speech about how strange it was to go to bed one day with a few thousand views on a Youtube video, and wake up the next with millions.

People part of the movement often share their promises and fulfillments through social media. Sheen stresses that it doesn’t matter how big or small they are – all that matters is that one keeps them.

Based in Cleveland, Sheen’s nonprofit is also looking to expand. He wants to start “Echo”s – regional chapters of “Because I said I would” – throughout the world. Currently, he has funding for two more. He emphasized the possibility of the movement’s effect on Akron, urging anyone who might be interested in starting one to apply on his website at becauseisaidiwould.com/echoleader/.

Since 2012, Sheen’s promises have taken him across the globe, sent him on a 10-day trek across Ohio, led him to giving 100 Disney World tickets to children in Nevada affected by cancer, and many other things.
This could be the experience of any one of us, too, if we are willing to keep our promises.