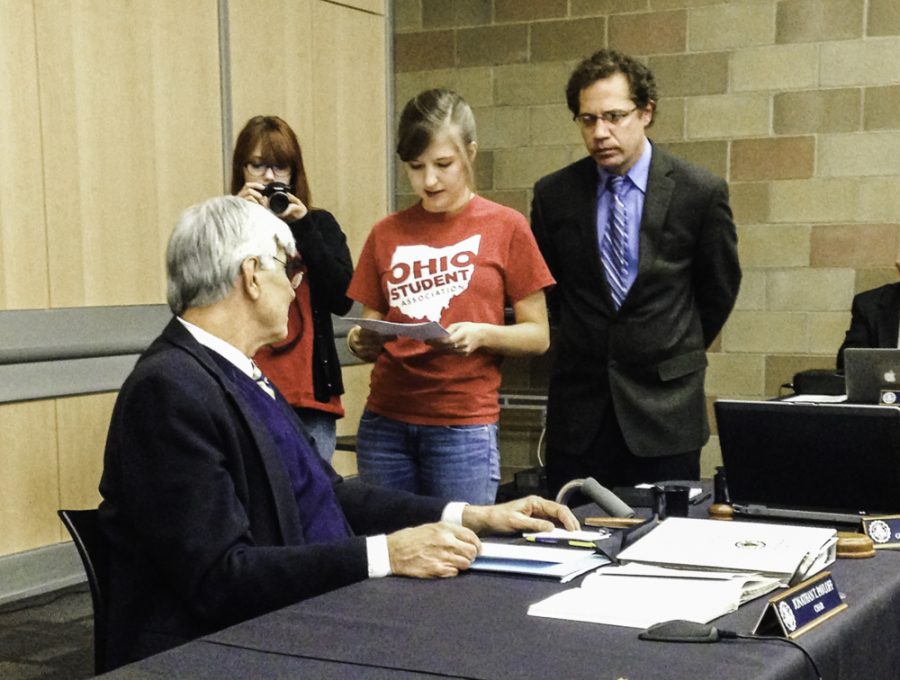 Right after the Board meeting, Board Chair Jonathan Pavloff patiently listens to a student reading a letter describing her concerns at the University. Read what we have to say about this in our Staff Editorial.

By Buchtelite Editorial Board

At the end of yesterday’s Board of Trustees meeting, Kelsey Watson, head of the Akron chapter of the Ohio Student Association, approached Board Chair Jonathan Pavloff with a three-page document in her hand.

It was a letter, addressed to “Mr. Pavloff and the Board of Trustees,” containing grievances the group has against University leadership and recent decisions, and a demand to meet with Pavloff before the end of April to discuss students’ issues and possible solutions more thoroughly. Watson planned to read the whole letter to him out loud.

“That actually went better than I thought it would,” Watson said afterward. Why so?

Pavloff showed great consideration while the letter was read to him, even turning away his colleagues desiring to speak with him only so that he could hear the rest of Watson’s remarks. Minutes later, he said he would read over the letter again and figure out what to do afterward.

It was both refreshing and greatly encouraging that the chairman of the UA Board of Trustees paid so careful attention to a concerned student, at a time when many others might feel their voices are not being – or have not been – adequately heard. For such an action we are grateful.