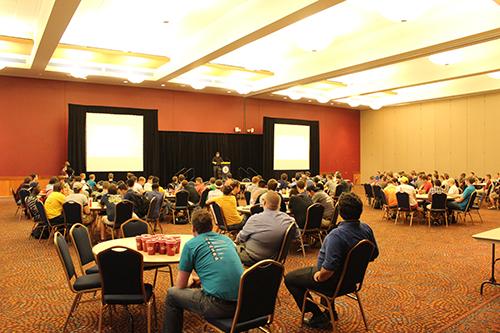 During the presentation, the RCC gave the audience statistics about sexual assault. Approximately 80 percent of rape victims are raped by someone that they know. Male college students are 78 percent more likely than non-students to be a victim of rape or sexual assault.

Women aged 18 through 24 who are enrolled in college are three times more likely than women in general to suffer from sexual violence. Eight percent of all sexual assaults occur while the victim is attending school.

According to the presentation, 300 rapes are reported to the Akron police department each year, with 400 rapes reported all over Summit county in the same time. That amounts to more than one rape per day.

The Rape Crisis Center offered a way to know if consent is truly given: a plan called “VOICE.”

V, for voluntary, is making sure that both parties are participating in an act of their own free will. O, for only active (not passive), is making sure that both parties are in favor of a sexual act. I, for informed consent, is knowing the nature of the act. C, for clear words or action, is verbal consent or actions toward wanting the action to occur. E, for engaged permission, is the consistent consent throughout the act.

The RCC stressed the importance of being an active bystander. If there is a problem, it is better to report it rather than let someone else take care of it. It is also important to be safe and know how to intervene. The three D’s come in handy with this: direct, distract, and delegate.

Wrapping up the event, attendees were asked to participate and take the OH-MAN pledge. By taking this pledge, the attendees agreed to not commit violence against anyone regardless of age, sex, sexuality, race, or gender identity.

Along with this pledge, participants also vowed to speak out against sexual violence and intimate partner violence. RCC also asked participants to teach their friends and others about nonviolent and respectful relations.

The RCC is not affiliated with The University of Akron; therefore, any information given to the center is confidential. By hosting events like these, the RCC hopes to gather the attention of students and hopes that people will step in and help the victims of sexual assault.

The RCC is housed in the Student Recreation and Wellness Center in room 246. The RCC is a program dedicated to helping the victims and survivors of sexual assault.