Honoring Zak Husein by giving back 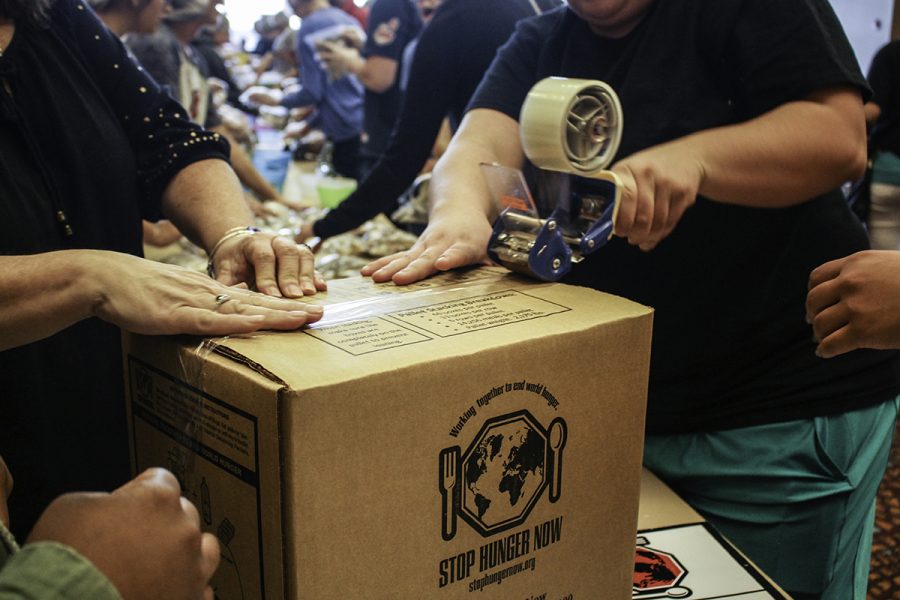 Family, friends, and community members work to package 40,000 meals that will be distributed to hungry people around the world in Zak Husein's name.

By Zaina Salem, Editor in chief

“Do not forget your loved ones. Please remember…. tell everybody all the good things you feel about them. Get straight to the point, because sometimes you will not have a chance.”

These words came from Ammar Husein, who spoke in front of about 450 people at a charity event held in honor of his brother, Zakareia “Zak” Husein, who was shot and killed in an armed robbery last December.

Fourteen thousand dollars was raised in two months to package over 40,000 meals in Zak’s name Tuesday night in the Student Union. The meals were provided by the organization “Stop Hunger Now,” a non-profit that coordinates the packaging and delivery of food to distribute to developing areas around the world.

Before family, friends, students, and faculty got to work, a service was held to remember Zak and the legacy he left behind.

UA student Justin Cohen, organizer of the event, introduced the program and then passed the mic over to UA President Scott Scarborough, Akron City Councilman Jeff Fusco, and some of Husein’s closest friends.

“Today is not a day to weep, it’s a day to celebrate Zak and his legacy,” said Scarborough. “Today is Zak’s triumph.”

Music played in the Student Union Ballroom as volunteers worked for a little over two hours to measure rice, seal bags, and package boxes. A gong was sounded each time the volunteers were a little closer to reaching their goal of 40,000 meals.

“It’s a great cause and I knew we all could make a difference if we work[ed] together,” said volunteer and sophomore student Allie Stanley. “I think it exceeded expectations 100 percent. There are so many people that came out to support and it’s really incredible.”

Cohen is president of a student organization called Wanderlust, which Husein was a part of. Many other organizations participated in the event, including the Muslim Student Association, Kappa Kappa Gamma, and more.

“Our intention behind the event was to create a memorial service to honor the life and legacy of Zak Husein and to bring light to a dark situation,” said Cohen. “We succeeded in doing this by bringing the Akron community together to do something charitable and great for Zak and his family.”

Zak’s younger sister, 17-year-old Duaa Husein, said she was amazed at how many people showed up to help.

“It just proves how much he was loved and how many lives he has affected,” Duaa said. “He’s made a difference during and after his lifetime.”

Graduate student Soha Gouilos, a friend of Zak, said the event was touching.

“It was the perfect cause to recognize and remember Zak as the legendary person he was, and as an individual who cared and always lent a hand to those in need,” Gouilos said. “It was phenomenal to have seen people of various races, ethnic backgrounds, and religions come together. I look forward to more events such as this to participate in to give back to society, just as our loving friend, brother, and son Zak did.”

Senior Mohammad Najjar, said he thought the event was a good way to honor his friend.

“This was the least we could have done on his behalf,” Najjar said. “All his kind actions were for others, but this one was for him.”

Investigators still have not found Zak’s killer, who shot him in the family-owned pizza shop New York Style Pizza on East Glenwood Avenue in Akron. The killer shot even after Zak gave up more than $600. The Husein family is offering a $50,000 award for information that can help police find the killer.