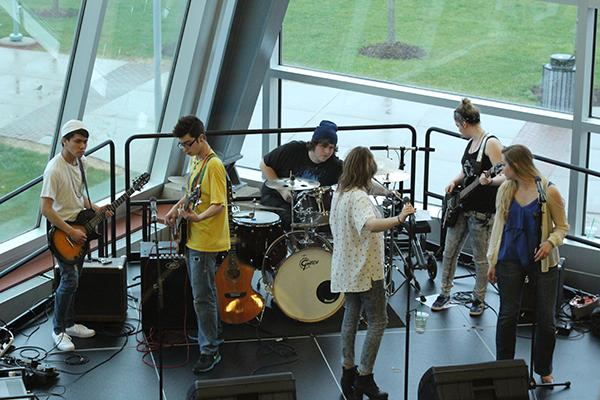 To celebrate Earth Day, the Zips Programming Network (ZPN) hosted Rock and Recycle on April 21 with featured bands Scenic Route and Spirit of the Bear.

At the event, which ran from 7 p.m. to 9 p.m., ZPN showed students how they can sustain the environment for the future. Attendees enjoyed making various crafts: pop can vases, flower pot painting, and the designing of a tote bag for groceries.

During Rock and Recycle, students were encouraged to voice their opinion on why they think it is important to celebrate Earth day.

“We have one Earth. We do not get a second chance if we trash this planet,” said freshman Jordan Timura. “We have to protect what we have now in order to have a better future.”

“We need to protect where we live,” said freshman Caroline Heltzel. “If we destroy our planet, we will destroy the only place we have to survive.”

Junior Melissa Bentler stated, “It is important to protect our Earth for the future generations to come.”

Freshman Nate Colegrove believes that the environment could “use some more respect.”

Planting trees is not the only way a person can celebrate Earth Day. Some people take the initiative to donate to a rainforest foundation instead of planting a tree. Others help to educate about the importance of trees to their community. Contributing to a local recycling program can also be seen as a celebration of Earth Day.

During the event, ZPN Diversity Events Chair Kristineth Aiad-Toss introduced the group of UA Honors College students that went to Dubai to compete for the Hult Prize. The Hult Prize is the world’s largest student competition for social good. This year’s team from Akron designed a nutrient-filled foam brick that would allow urban areas to grow plants 35 percent faster.