Acapella in the spring 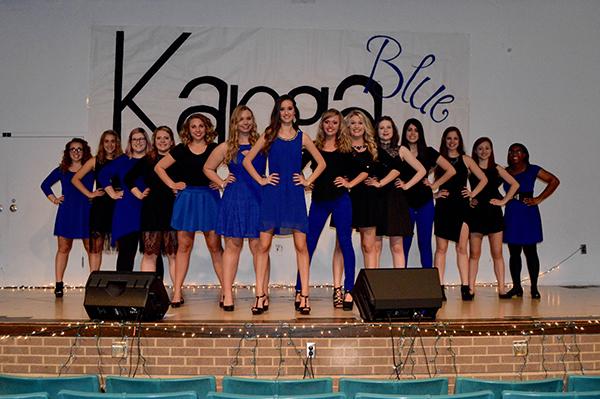 The group took the stage at 7 p.m and, over the course of two hours, performed 13 songs. Kanga Blue holds concert during both the fall and spring semester. This was its fifth performance.

The concert showcased an entire year’s worth of work from Kanga Blue. Song arranging and practice began last summer as the women worked to develop and critique a range of songs with different styles of music. The concert was a culmination of the hard work and dedication by a group that met three times a week to rehearse and perfect their craft.

The group is composed of 14 UA students with diverse majors and interests. The concert opened with a brief video introducing the members, their majors, hobbies, and interests. Between songs, Kanga Blue President Jessica Dixon pulled each member aside and presented them with a special award that reflected their personality. Awards included “Small but Mighty,” “Leader in Tempo,” and “Motivational Kanga.”

Kanga Blue’s songs were an eclectic mix of musical genres. Some pieces reflected recent works of pop music. Within each song, one or more students performed a vocal solo that displayed their range and ability. Different tempos and musical character were demonstrated in songs titled “Ballad-Like Rap,” “This Song Will Make You Cry,” and “Powerful Disney Song.”

Kanga Blue also coordinated with other choral groups on campus. The Rhythm and Roos co-ed opened with two songs while nUAnce, an all-male acapella group, performed a song with Kanga Blue.

Senior member Brittany Smith recalled using rented audio equipment at her first concert and a much smaller crowd. Smith said the group has become more comfortable onstage and is less nervous about performing.

Dixon also said they didn’t have hand-held mics at the first concert, so choreography was impossible. Last Friday, however, the group coordinated elaborate dancing with its songs.

The addition of higher-end equipment was made possible via donations received at past concerts. The donations accumulated were put toward audio equipment, concert decorations, song arrangements, and ensuring the concert remains free of charge. At the 2016 spring concert, $186 was raised.

The performance was well received by the audience with loud applause and thunderous participation in a rendition of Gwen Stefani’s “Hollaback Girl.”

Rebecca Lozier, a student majoring in English, described the group as “fun, powerful and energized.”

Kanga Blue possesses a strong following of audience members who attended the concert in blue. One of Kanga Blue’s Twitter hashtags called for a #KangaBlueOut, asking audience members to wear a blue article of clothing. Donning a blue morphsuit, one fan strode onstage to receive an award for his persistent tweets referencing Kanga Blue.

Previous members of Kanga Blue joined onstage and performed “We Belong Together (Alumnae Song)” before the original group ended the night with “Fierce Girl Power Song.”

The concert ended to a standing ovation and members of Kanga Blue stepped off the stage to greet fans, friends, and family.

Dixon said the group will take some time off to relax from an intense semester of practice and school, but by June, preparations for the fall concert will be underway.