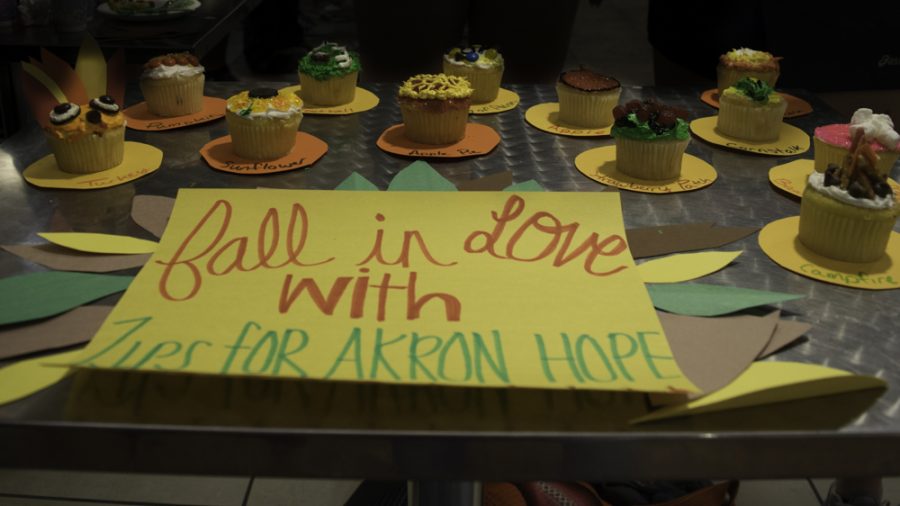 University of Akron student organizations had the opportunity to compete in Cupcake Wars, hosted by the Zips Programming Network, on April 25 in the Student Union.

Teams decorated their cupcakes with their respective themes for a chance to win $300, $200, and $100 for the first, second, and third place.

A few of the 13 student organizations included Society of Women Engineers, Zips for Akron Hope, Interior Design, and LGBTU.

All participating teams met in the Student Union Theatre to go over rules and instructions for the competition. A representative from each team played Minute-to-Win-it games to gain decorating supplies. Winners were given first choice of supplies, and teams that came in last place would receive not-so-desired supplies like Goldfish crackers.

The theme for Cupcake Wars varied for each team, but they all dealt with holidays, official and unofficial.

Teams were not allowed to trade supplies or themes for their competition and had to make do with what they were given and had won.

The teams had 20 minutes to decorate 12 cupcakes.

The judges, Katie Schneider, Megan Morford, and Willy Kollman, evaluated each team’s cupcakes on creativity, adherence to theme, use of supplies, presentation, and appeal.

Spanton Hall Government member Josh Mercier said the hardest challenge about this competition was working with the materials they won, but he enjoyed playing the Minute-to-Win-it to win the supplies.

Cupcake Wars is the first time that ZPN has had this sort of competition.

Event organizer and ZPN Traditional Chair Kylee Siefke said ZPN wanted to create something similar to Mocktails which happens during the fall semester.

“It went really smooth for the first time – we were a little nervous to how it was going to go and overall it was really successful,” Siefke said.

Siefke said ZPN is going to try and have this event again because she received a lot of positive feedback from the organizations that participated.