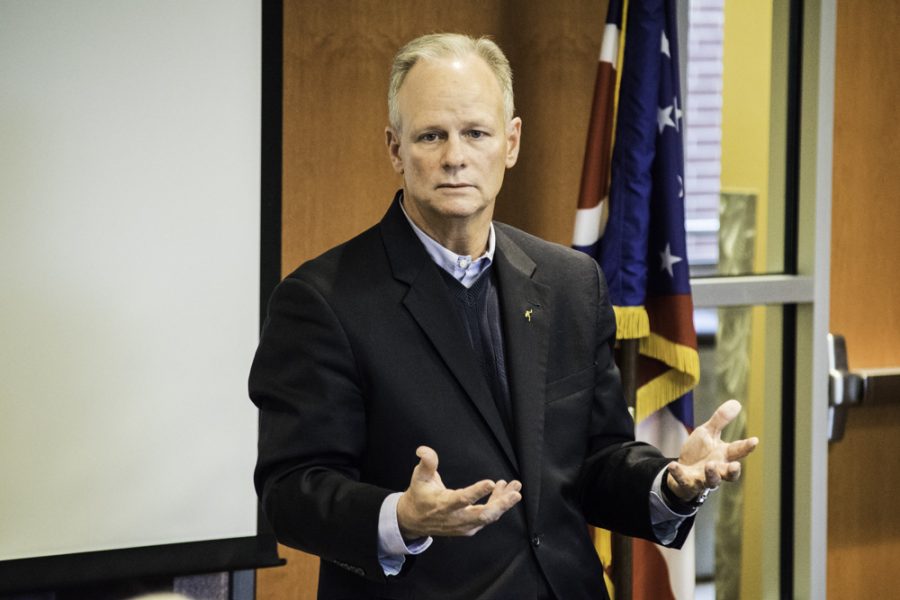 President Scarborough gestures in a speech to the Undergraduate Student Government on April 7.

The Graduate Student Government (GSG) sent out the survey to 4,019 graduate students on Feb. 23 and garnered a 21 percent response rate (834 students).

Responders were also asked if they would recommend The University of Akron to others students.

Thirty-five percent would not recommend UA for either.

GSG Vice President Caroline Drotar, who drafted and analyzed the poll, presented the findings to President Scarborough on April 21.

“Frankly, [Scarborough] did not think they were very important or indicative of anything substantial,” Drotar said. “I attempted to stress the [importance] of graduate students’ opinions, but it did not seem to make a difference.”

This poll comes two months after a similar survey by UA’s Undergraduate Student Government (USG). Drotar said that her survey was geared more toward the graduate assistantship issue.

“Both surveys demonstrate that there is an institutional problem at the University that needs to be addressed,” said Drotar.

Drotar admitted that she did not find a way to prevent duplicate responses, so it’s possible some students could have taken the survey more than once.

The University confirmed yesterday that GSG met with President Scarborough last month to discuss the survey. UA spokesman Wayne Hill said that Scarborough understands the results, and that there will be ongoing discussions with both USG and GSG going forward.