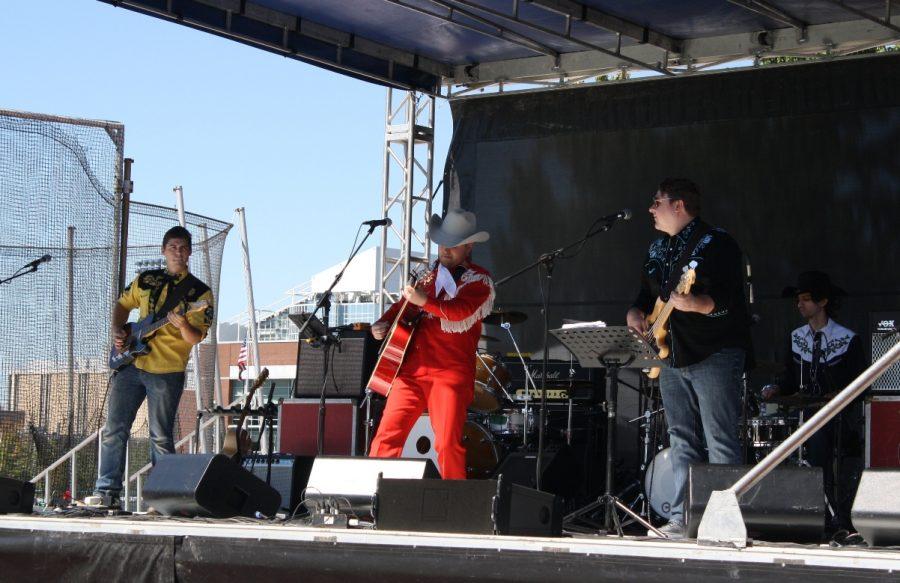 Shooter Sharp and the Shootouts perform during the Touchdown Music Festival

Gates opened to the free event at noon and guests were able to purchase cold beer, fresh meals from food trucks, and participate in raffles and other contests promoted by the event sponsors. Food was provided by Wholly Frijoles Mexican food truck, Fire Truck Pizza company, and the Orange Truk.

The event served as a pre-game party to the Zips football team’s opening game at InfoCision Stadium against Virginia Military Institute. Local radio station 91.3 “The Summit” was the promotional partner for the event.

JD Eicher opened the fest and the guitar-slinging act of Shooter Sharp and the Shootouts played after.

Ryan Humbert, red-suited frontman of Shooter Sharp, thanked the audience for attending for making all the staff’s and sponsors’ worth all the trouble. Humbert’s band played classic country tunes reminiscent of Merle Haggard and Johnny Cash, paying tribute to an American musical movement.

The Bizzaros, an Akron punk-rock outfit from the ‘70s, then took the stage and performed a sonically assaulting set of old classics and newer, unreleased material.

After the show, lead singer Nick Nicholis and other members of the band were happy to meet with fans, provide autographs and recount stories of their time at The University of Akron. Nicholis recalled using Buchtelite equipment at midnight to print columns for an underground paper that featured an editor who would later go on to work for Hustler Magazine.

Soul Asylum, legends of 1990s alternative rock, took the stage as the final act and brought forth a crowd of older fans.

Chris Loesch, fourth-year exercise science major at UA said he “enjoyed the music, but [wanted] something more contemporary that college kids are familiar with.”

Megan Schavver, a grad student of clinical mental health counseling said she will attend in future years if it is free and the music is good, but “hopes a bigger and more relative act like the Black Keys plays.”

The event was family friendly and offered entertainment for kids in the center of the field. During a brief intermission, the Zips Marching Band circled the track and entertained the crowd with an energetic performance.

The event was a success from many of the concert-goers’ viewpoints. The older crowd enjoyed the music, applauding loudly for each act, but the younger guests hoped to see a more current act in following years.