Coffee and chat with the president 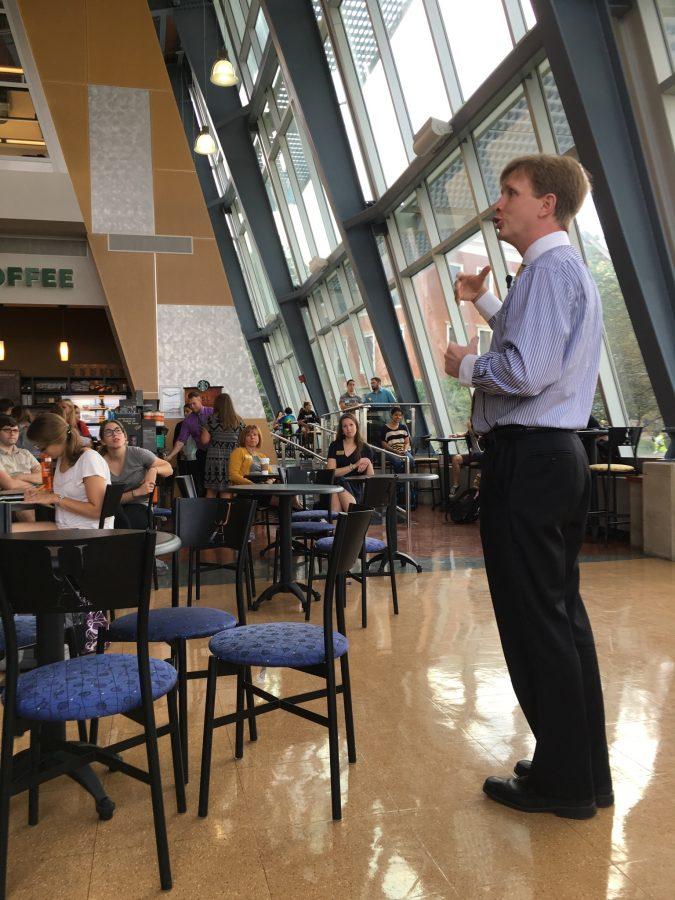 Interim President Wilson talks to students during the Town Hall meeting at Starbucks on Sept. 7.

Around lunchtime yesterday, University of Akron interim President Matthew Wilson came to the Student Union Starbucks Lounge to introduce himself to students and answer their questions in an informal, town-hall-type event put on by UA’s Undergraduate Student Government (USG).

It was yet another instance of, as Wilson often reminds people, his commitment to the students and to good communication. He has been interim president for eight weeks, but in that time has been spotted helping freshmen move into dorms, eating lunch with various student groups, greeting students on the first day of classes, and handing out student business cards that include his cell phone number and an invitation to call him with any questions.

“From what I could see, Dr. Wilson brings great spirit to the University. It’s refreshing, and [the talk] seemed very genuine,” said philosophy professor Joseph LiVecchi. “As he said in his recent mailing, we should revive the spirit of cooperation, and I think this goes a huge way to do so.”

In the dialogue with students, which lasted just over an hour, Wilson answered questions spanning enrollment, donations, faculty hiring, graduate assistantships, and his personal experience and qualifications.

Enrollment at the University has been steadily declining, around four percent a year, since a peak in 2011 of about 30,000 students. Problems with last year’s administration and the angered response from the community made numbers for fall 2016 even more ominous.

Wilson said, however, that though enrollment is down from last year, it is less down than early numbers indicated – 7.8 percent from a projected 12.3 percent –  and that in consequence, “This is the only time you’ll hear me [Wilson] say that I’m encouraged by seeing a drop in enrollment.”

Wilson also said donations, after falling last year, are on their way up again.

Specifically, he mentioned a $250 thousand commitment made by a former UA Board of Trustees member to the new $20 million scholarship campaign “Making a Difference. Moving Forward.” announced recently, and a major donation in the “millions of dollar” range that he says he hopes to announce in the next few weeks.

As the University still is in financial straits, however, Wilson has put a hold on all hiring for the time being. He said he did this to avoid more cuts.

As to graduate assistantships, Wilson said he has not had major discussions about it yet.

“I didn’t even know he was coming out here until I walked by and saw him,” said sophomore Jordan Cooper. “The fact that he’s out here explaining things and just reaching out to us – he’s already made a good impression on me.”

Senior Justin Brown, who missed most of the event but caught a few questions at the end, had similar thoughts. He said that when Wilson sent his first introductory email over the summer and encouraged students to contact him, Brown did so. He got a response only minutes later from the interim president and, according to Brown, “[Wilson] even signed his name ‘Matt.’ I’m interested to see…[his] improvements to the University, but from a relational standpoint, he’s on point.”

Yesterday’s event was only the first installment of USG’s Town Hall Series. Updates on future events can be found on USG’s twitter page, @USGUA.