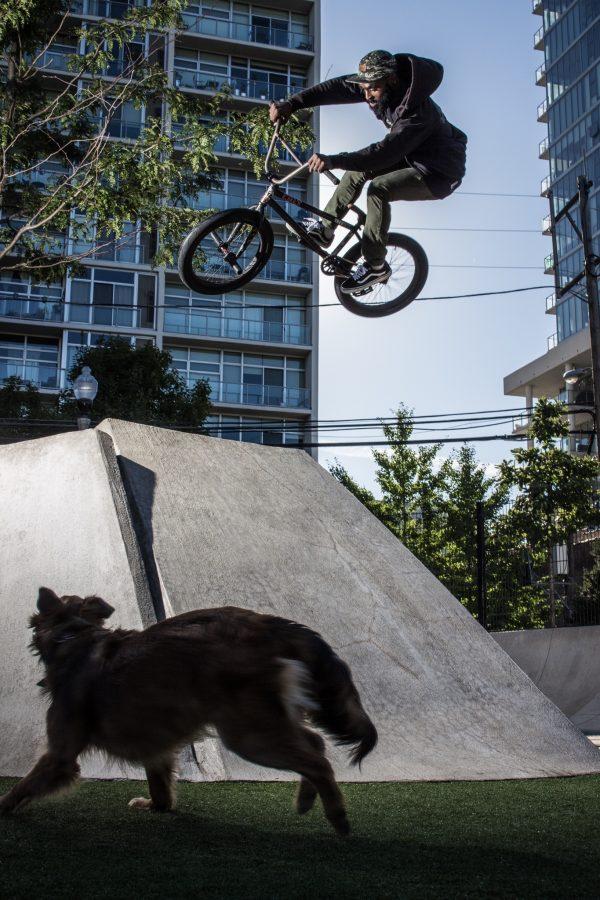 Brian Sloan photographed BMX athlete Timmy Theus, pictured above, in Chicago after being selected as one of the 16 photographers in the Red Bull Illume competition.

Red Bull, partnering with major companies such as Sony, sponsored Red Bull Illume, a photography contest that is geared toward adventure and action. Its goal is to bring the public and sports world together as one.

Sixteen students got to attend this workshop in Chicago, Sept. 10 through Sept. 12. University of Akron’s Brian Sloan was in attendance, hosting his own photoshoot with BMX athlete Timmy Theus, and action-adventure lifestyle photographer David Lehl, who has collaborated with brands such as Mountain Dew and Oakley.

When asked about how it was photographing the BMX athlete, Sloans replied “It was great! Timmy rips and has an awesome laid back style to his riding.” He also had an input on Dave Lehl, saying that “Dave was super helpful, particularly with setting up lighting and [he] helped me build off of my strengths.”

The top three photos were chosen at the end of the workshop, and will be sent to feature in the Red Bull Illume in Chicago, Sept. 28 through Oct. 9.

Brian Sloan, a graphic design major, applied for the workshop over the summer on a whim, just to “get his stuff out there.” He explained how big of a deal this was to him, including the fact that he is only one of 16 students in the U.S. to be selected to attend this workshop.

After he graduates, Sloan plans to either work in graphic design, shoot photos, or tour with his band, Bare Walls.

“I don’t know what I want to be when I grow up, but I’m confident I’ll find my way.” Brian said. “I’m just going to go with the flow ‘cause you can’t really plan for stuff like that.”

The overall winner of the Red Bull Illume will receive a $40,000 Yobodashi voucher, which can be redeemed for any of the company’s consumer goods, photography gear from Sony worth over $60,000, or top-of-the-line material from G-Technology.

Sloan’s photographs will be featured in an exhibition on campus in Folk Hall on Friday, Sept. 16th from 7 to 9 p.m.