Enrollment down, hopes up 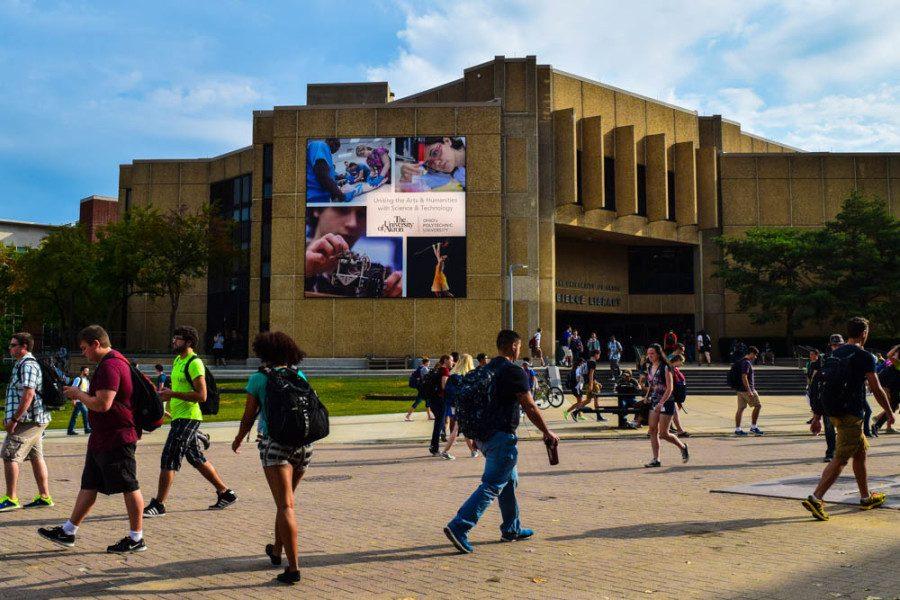 This year, enrollment at The University of Akron has fallen by 8 percent — 2,025 students — from that of fall 2015, according to an official report.

In a letter sent by interim President Matthew Wilson to the faculty, he thanked the hard work of the Office of Admissions and others who helped slow down “a much steeper decline [in enrollment]” than was expected.

During the past two months, following the appointment of Wilson as interim president on July 11, the enrollment decline was mitigated by the number of students enrolled increasing 4 percent.

Also included within the letter, Wilson listed other numerical aspects of the report for the fall 2016 totals:

-The average GPA for traditional freshmen is 3.44, the highest in UA’s history. Traditional freshmen are students who enroll directly from high school. For fall 2015, the average GPA for confirmed freshmen was 3.32.
-For incoming freshmen, the 23.3 average ACT score remained the same from fall 2015.
-This year, 589 freshmen are enrolled in the Williams Honors College, which is a decline from the 640 students last year.
-The total enrollment in the Williams Honors College is now 2,025, which is the largest in UA’s history.
-The percentage of minority students in the new freshman class increased from 23.1 percent in 2015 to 25.1 percent this year.
-Among the entering class, the number of out-of-state students grew to 9.3 percent compared to 5.7 percent in 2014.
-Total enrollment represents 45 states and 92 other countries. 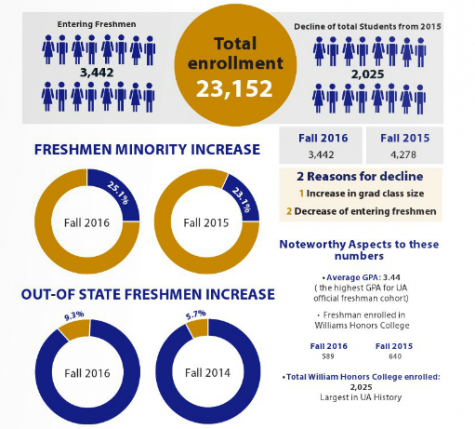 Wilson’s letter cited two “principal” reasons for the overall enrollment decline: the decrease in freshmen enrollment and the increasing size of graduating classes in recent years.

While 4,278 freshmen were enrolled for the fall 2015 semester, this year only 3,442 were reported enrolled, which is a 20 percent decline from last year.

John Zipp, president of the Akron-American Association of University Professors and sociology professor, names another reason for the enrollment decline.

“My sense is that the enrollment decline reflects various policy decisions made in the last few years, decisions that were clearly not well-received in the greater Akron community,”  Zipp said. “In brief, fewer prospective students were buying what we were attempting to sell.”

In his letter, Wilson mentioned that he is working to bolster enrollment next year by visiting principals at local area high schools. He also expressed appreciation for the excitement that the campus and the Akron community has shown for UA.

William Rich, chair of the Faculty Senate, said “[Wilson’s] appointment as interim president, and the steps he has taken since his appointment, have made significant progress toward repairing the University’s reputation… Ultimately, what draws students to a university is mainly the quality of education and the kinds of academic programs it offers.”