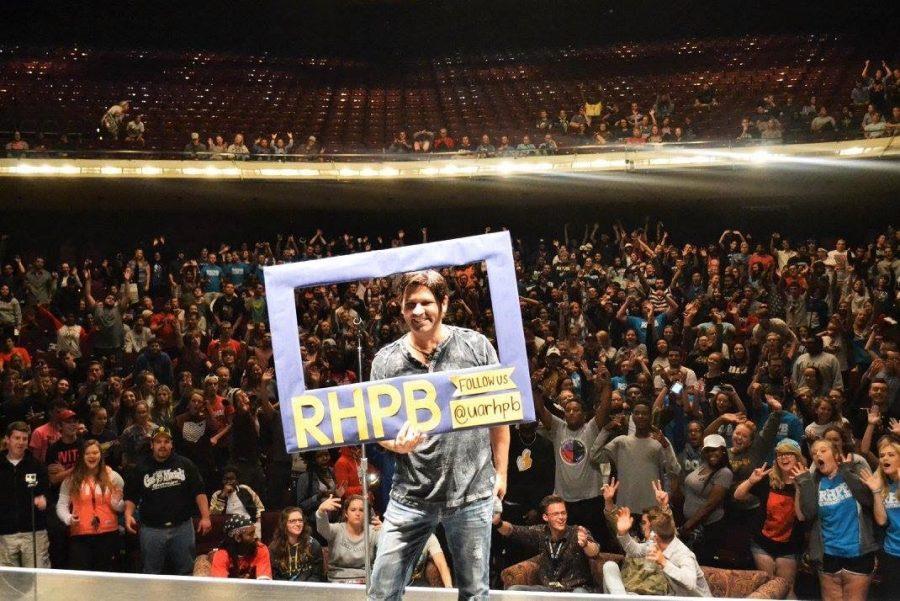 This was Michael C. Anthony's 17th time performing at The University of Akron.

Last Wednesday, Sept. 14, hypnotist Michael C. Anthony gave an exceptional 9:09 p.m. performance at The University of Akron’s EJ Thomas Hall, which was organized by the Residence Hall Programming Board (RHPB). This was his 17th time performing at UA.

Anthony is a single act who entertains the crowd with his power of hypnosis. He brings volunteers on stage and puts them in a trance, making them do crazy and fun stuff that entertains the audience.

He says his career started by doing a card trick for a friend. That same friend got him in touch with a lady that booked him shows at colleges. But he says his true inspiration for hypnotism and magic came from his great uncle Joe Lamonica, who was also a hypnotist and a magician. Hypnotism has been his full-time career for 20 years, and for it he has traveled all around the world and is now the lead hypnotist for a group called “The Illusionists.”

“It keeps you from getting a real job,” Anthony said.

Last Wednesday’s event gathered a total of 828 students, which was a higher number compared to the previous 9:09 p.m. event.

Before bringing people on the stage he told the crowd the rules by which he does his hypnotism. When he called them up, students mainly from the front rows ran up from their seats to join him on stage. One by one, he pointed them back to their seats if he could tell they were not hypnotized.

“The difference between [a] college campus and TV is that on TV the act has to be shortened, and on college campuses people volunteer and are more enthusiastic,” Anthony said. “[The crowd] is my driving force…I have hypnotized many people, but at the end it is all up to the crowd and their reaction,” Anthony said.

One of the favorites for the audience was when the men on stage pretended to give birth and tried to feed their newborn, imaginary babies.

Tom Faesel, the faculty advisor for RHPB, says he was proud of his organization’s handling of the event.

“Everyone had a great time. [Anthony] is a professional and he keeps the crowd interested. The planning that went into this was successful and that shows the strength of RHPB.”

RHPB will be holding many more events this semester. These and more information can be found on its page on Orgsync.