The dig on campus construction 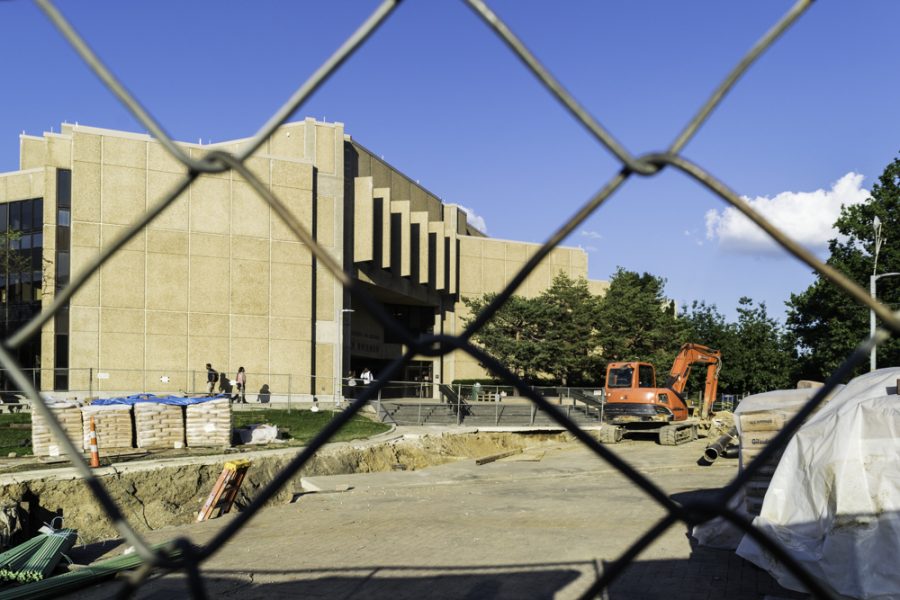 By Grant Morgan, Editor in Chief

If, in these first few weeks of the semester, you have for any reason had to go through the center of campus, you cannot have failed to notice the large construction project happening there.

It began a couple years ago with a plan to repair two vaults in front of Bierce Library that had eroded over the years, according to Nathan Mortimer, UA’s chief financial officer. Vaults are the structures that give access to plumbing underground.

(Fun fact: there are five miles of high-temperature line underground throughout campus.)

The work began in July of this year, and the vault and pipe repairs are expected to be finished by the middle of October, which is when UA buildings switch from being cooled to being heated. Some brick walkway and other surface-level repairs might not be finished by that time, but will nonetheless be restored to their previous state.

“We do appreciate students and others in the campus community putting up with this,” UA spokesman Wayne Hill said. “It’s one of those things that needed to be done so that we didn’t have the kind of problem we had near [the J.A.R.].”

Hill was referencing an underground line that ruptured unexpectedly last spring outside the James A. Rhodes Arena.

The original plan for the vault repair near Bierce was projected to cost $670,000, and was funded by the state in the roughly $20 million it gives to UA every two years for capital projects.

The added work on the high-temperature line is bringing the total cost to about $1.7 million. The application has been made to have the state include this in its funding, and is expected to meet approval.

Such funds are not the same funds that UA receives from the state each year to operate. They can only be used for the capital repair and improvement projects that are submitted to the state biennially.

So for the expanded high-temperature line work, UA is not asking for more money from the state, but only that the state approve such a use of the capital funds it already has.

There is one more vault-repair project UA plans to do either late next spring or early next summer. This vault lies underground between the Goodyear Polymer Center and the “split rock” just off the central brick walkway near Ritchie Hall. It will also be paid for by capital funds from the state.

Another construction project, completed a few weeks ago, was the repaving of Orchard Street near the Spicer dormitory building.

Orchard Street connects Spicer Street to Goodkirk Street, providing one of the quickest routes to get onto State Route 8 South.

The cost for this project was $35,000, and was paid for by UA’s own operating funds, and not funds from the state.