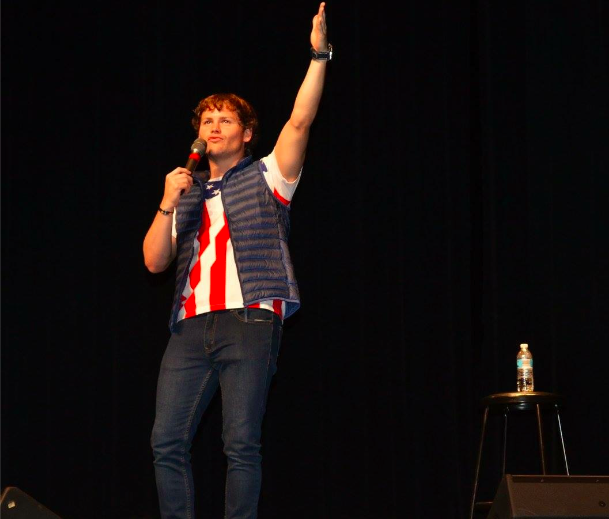 Last Wednesday, Sept. 21, comedian Drew Lynch brought a crowd of 682 to its feet with an exceptional first-time 9:09 p.m. performance at The University of Akron’s EJ Thomas Hall. The event was organized by the Residence Hall Programming Board (RHPB).

Lynch is a single act who entertains the crowd with his jokes. He lets the audience be part of his jokes and makes them into laughable material.

He says before becoming a comedian he wanted to pursue acting, but an accident left him with a stutter — which made acting difficult.

This did not stop him from getting into the industry of arts and theater. He always had hope that someday there would be a career for him which he would continue throughout his entire life.

He went into comedy by auditioning on the TV show “America’s Got Talent” (AGT). He used his stuttering as part of his act. The result came out great for him, as he won runner-up. From then on acting has become his full-time career.

“I got dropped from my acting agent and thought that I had no artistic outlet,” Lynch explained.  “[So] what do I do? I went on stage and talked about my problem with stuttering and it became therapeutic. It is a cathartic release…I can contribute as an artist again.”

Lynch started last Wednesday’s show by talking about his stuttering and even used that to his advantage. Throughout the show he involved the audience in his act and students showed enthusiasm throughout.

“No other experience can be like I had on ‘America’s Got Talent,’” Lynch said. “Being on the show and being with a live college audience is very different. Being at EJ Thomas Hall felt like being at a music venue. I liked the vibe of the theater,” Lynch continued.

At the end of the show, people took pictures with him and his service dog. Lynch told students to “follow [their] dream if you want to achieve something; it takes a lot of risk, then go with that risk.”

More RHPB events and information can be found on Orgsync.