What you need to know to vote 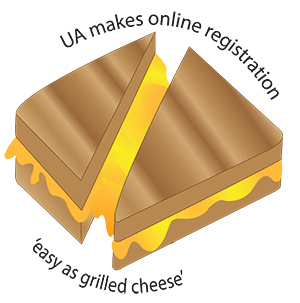 Are you a U.S. citizen? Will you be at least 18 years old by Election Day on Nov. 8?  Have you been an Ohio resident for at least 30 days? If you answered yes to all these questions, you can register to vote in the state of Ohio.

The Oct. 11 deadline to register to vote is fast approaching. Even if you are not an Ohio resident, you can still vote via either mail-in absentee by requesting a ballot or by changing your address. Both can be accessed on your county’s board of elections’ website.

There are multiple ways to register to vote. In person, you can visit your county’s board of elections, BMV office, or public library. You can also update your address at any of these locations.

The Summit County Board of Elections is located at 470 Grant St., just south of campus.

The University of Akron has made online voting registration easy as grilled cheese. To register visit uakron.edu/studentlife/serve/elections.

Once registered, voting itself is also easy. You can look up your polling location at voterlookup.sos.state.oh.us. Bring an official form of ID on Election Day Nov. 8 and you can vote.

Despite the accessibility of registration, many young people do not register. According to Campus Vote Project, 42 percent of 18- to 24-year-olds were registered to vote in 2014. This is the lowest percentage in 40 years.

In 2008, one in five young people aged 18 to 29 weren’t registered to vote because they missed the deadline. Another 1.7 million young people either didn’t know how to register or where to register.

Not only is registration among young people low, but voter turnout is at an all time low. In 2014, 17 percent of 18- to 24-year-olds cast a ballot, the lowest turnout in recorded history among this age group.

UA political science professor David Cohen, in an email interview, emphasized the importance of voting, saying that it is crucial to democracy.

“People who don’t vote are more apathetic towards their government and less apt to get involved in civil society,” he wrote.

Cohen went on to say that young people seem to be more invested in the present, and less in the future.

However, many students are hesitant toward the idea of voting, especially in this year’s election.

Freshman Josh Barnes admits that voting is important, but said that he “doesn’t really see a reason to vote,” given that he doesn’t like either presidential candidate.

“There are no perfect candidates in the real world,” Cohen says. He advises students to vote for the party and candidate that best represents their beliefs.

Cohen also says that every vote matters. He cites the 2000 presidential election in which Al Gore lost the state of Florida by less than 600 votes, potentially because of the many Floridians who didn’t cast a ballot because they didn’t feel their vote mattered.

Before deciding to stay home on Election Day, remember that a successful democracy requires participation. There are still several important upcoming state and local races including the Senate race between Rob Portman (R) and Ted Strickland (D) in Ohio.