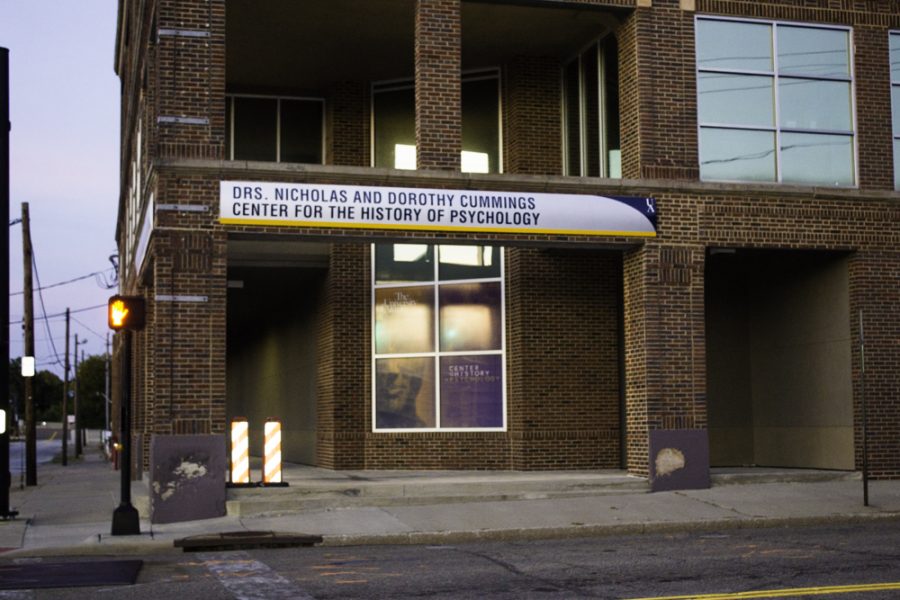 The Cummins Center for the History of Psychology is on S. College St.

In the printed version of this article, the photo is wrongly attributed to Kristina Aiad-Toss. Diontez Ross took the photo.

A new partnership has formed between The University of Akron’s Drs. Nicholas and Dorothy Cummings Center for the History of Psychology (CCHP) and the Journal of Multicultural Counseling and Development (JMCD).

The main objective of the partnership is to archive and preserve the many audio and visual materials possessed by the JMCD within the storage space of the CCHP.

One of JMCD’s newest and most exciting published series is the “Hearing Our Elders” program, which documents interviews with some of the nation’s most influential social and political cultural figures.

So far, interviews have been held with congressman John Lewis, Terrence Roberts, and former First Lady Rosalynn Carter, the latter two of whom will have direct transcripts and recordings preserved in the CCHP’s designated audio and visual archives.

David Baker, executive director of the CCHP and professor of psychology at Akron, is involved in outreach partnerships for the Center. He credits the initial formation of the partnership to two of his colleagues, Caroline Clauss-Ehlers of Rutgers University, who is editor of the JMCD, and William Parham, former associate editor of JMCD and series author, who brought him the idea.

Commenting on the “Hearing Our Elders” series, Clauss-Ehlers said, “Capturing the voices and historic contribution of social-justice leaders allows us to remember our past and, in so doing, pave the way for a just society in the future.”

In speaking on the project’s long-term goals, Parham notes the aim to “assemble a group of individuals whose cultural, ethnic… and other identities, though varied and complex, unite us and invite us to forever see the past as the foundation upon which our shared present and futures rest.”

According to Baker, being able to observe the reflections of our history is vital to understanding the context of contemporary issues.

“Increasingly, we live in a multicultural society and our efforts to embrace and incorporate a multicultural perspective are well worth our attention,” Baker said. “An important part of our mission is to tell the complete story of the history of psychology and to explore what it means to be human. To this end, we seek to gather materials that tell the stories of traditionally underrepresented groups in psychology and the context in which their lives and work unfolded. The addition of the activities of JMCD fit very well with that.”

Originally called the Archives of the History of American Psychology in 1965, the CCHP is an institution dedicated to the preservation of the world’s largest repository of manuscripts, media, and artifacts connected to the history of psychology. What once was housed in the bottom floor of the Polsky building has now transformed into a four-story epicenter for the research and understanding of psychology and human sciences.

The National Museum of Psychology, which will open in the fall of 2017, will highlight many of CCHP’s holdings. The UA psychology department also offers an online undergraduate course in the history of psychology, and a certificate in museums and archives studies. Baker mentions these as ways students and faculty can better interact with CCHP.

Though the Center is currently closed due to renovations, those interested in learning more can view the its webpage at uakron.edu/cchp.

As the Center continues to expand, it is clear that the importance of its work in historical preservation grows along with it. u

“We’ve come a long way from the basement of the Polsky building,” adds Baker.