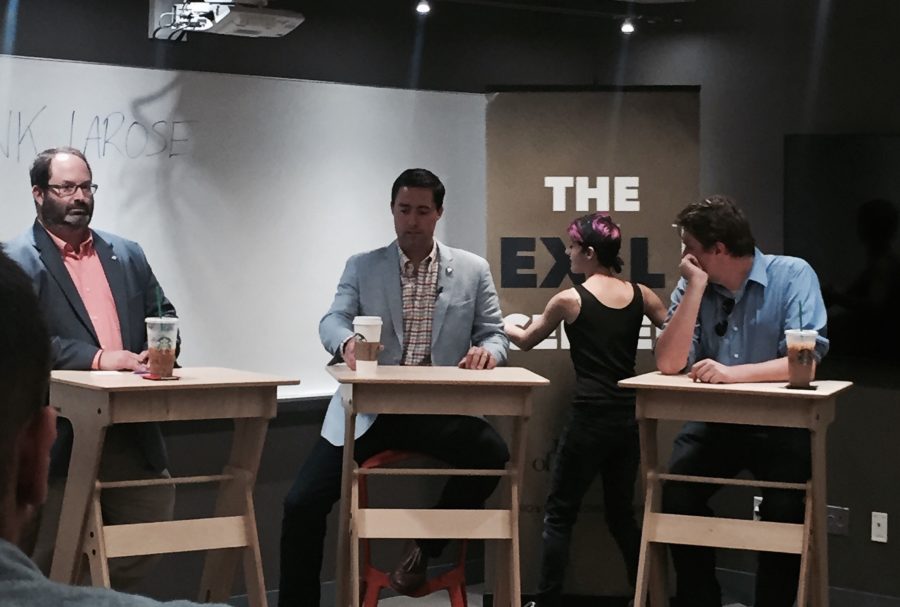 This past Friday, Sept. 23, The University of Akron was fortunate to have Ohio State Senator Frank LaRose (R, 27th District) visit.

He spoke in front of two political science classes, American Congress and American Presidency, both of which are taught by professor David Cohen. LaRose and Cohen also took part in a panel discussion hosted by the EXL Center, whose third panelist was Alex Pavloff, a research assistant at the Bliss Institute and current candidate for Summit County Council.

“All bets are off. This election is unlike anything I’ve ever seen… people in your line of work will be studying this in political science schools in years to come,” LaRose said.

“The candidate on my side of the isle has broken a lot of the rules, but continues to do reasonably well in the polls despite that. I would have not advised him to do many of the things he has done, but in many states like Ohio you see him within the margin of striking distance.”

Cohen then asked whether LaRose thinks presidential debates are over-hyped.

“I think debates are primarily entertainment,” LaRose said. “In the primary cycle, it’s a shabby way to select a candidate.” He advised people to do their own research instead, like looking up the background of candidates and their policy proposals.

“What you end up seeing in a debate is a contest of gotcha one-liners… which is beneath the dignity of the office,” LaRose said. “But it’s kind of reality TV. Now, will I watch? You bet it. It’s interesting, it will make news, and it can change the course of an election. This is not anything new in history.”

LaRose encouraged students interested in pursuing a political career to get involved in a campaign, even as a volunteer, and work their way up.

“The best way to get involved in politics is to work on campaigns – [to work on] as many as you can to meet people, establish a reputation and build up a network,” Cohen said. “Some of our most successful candidates and elected officials in the country started off as unpaid volunteers on campaigns.”

He gave the example of governor John Kasich, who began his political career as an aide.

The EXL panel broadcast can be listened to here: goo.gl/UPllEJ.