Response to ‘A bad showing for students’ 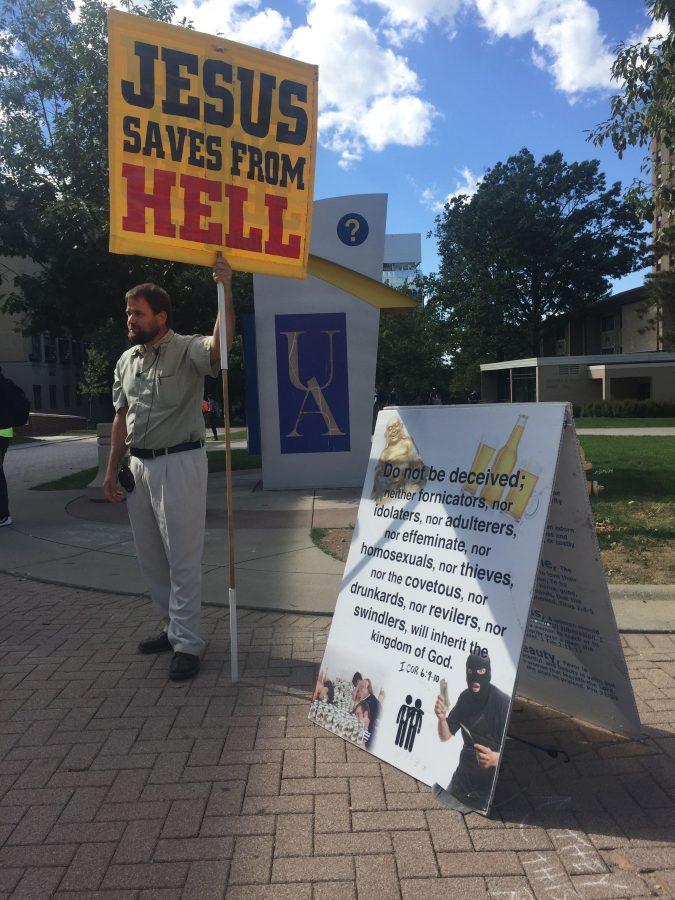 You know who these people are. They were here last week.

I read [the Buchtelite’s editorial of Sept. 29 called “A bad showing for students”] because it focused on that group. The one that comes on campus every semester since I attended (and before). The group that ignites fear and frustration, debates and fights, among the community.

My experiences were once limited to my commute to class; walking past people screaming language that I don’t agree with isn’t new to an East Coast gal. This situation isn’t also unique to The University of Akron. However, these groups had a personal impact on my friends. So it doesn’t surprise me while I was reading this article, it seemed that this person didn’t know any individuals who would be impacted by these groups negatively. This writer is critiquing the students’ response and suggests they play an important role in the University space.

Reading this gave me flashbacks to when I was part of Liberation in Progress and the Lesbian, Gay, Bisexual, and Transgender Union. I remember talking with the people who made me feel welcome as a transfer student. I remember the LGBTU office in the Student Center, where friends and officers congregated. Finally, I remembered why we were able to have an office as a student organization: we were the only safe space on campus for LGBT+ students.

For members of this group, they are faced with unwelcoming environments and homophobic remarks even before they come on campus. Their skins are already tough; 85 percent of LGBT youth in the U.S. were verbally harassed within the past year. Even today, they can be kicked out of their homes for being who they are, and they make up of 40 percent of homelessness. Exposures to these negative attitudes increases the likelihood of violence and compromises their mental health. This is a concern that the University should have if its focus is student retention; promoting a positive environment and inclusivity would reduce the occurrences of risk factors, such as unexcused absences, that impact the students.

Those hateful speeches (accompanied by megaphones and high-tech microphones, no less) contribute to the University as a stressor. This compromises the learning environment and permits only those who have nothing to lose to ignore their language. You can have any opinion or belief you want, but when those beliefs target the humanity of those oppressed, don’t expect to be protected from the backlash. That is why you see students reacting this way: they know this too, and are tired of everyone around them for accepting their presence.

As a student, I only had to cope with those groups on campus by putting on my headphones and listening to my friends who were impacted by the rhetoric afterward. As an alumna and future public health researcher, I have a responsibility to call out the factors that would compromise the overall mental health of the students.

It’s very clear that a conversation needs to be had. I ask the writer to consider and reflect where [he] come from. While [he] may be in a position where [he] can ignore the messages and go on with [his] day, many of [his] peers are not. [He] is able to look at these groups and think of them as lessons, but for students unlike [him], they are potential compromises to their safety and mental health. I fear that, permitting these groups to proselytize in this fashion, [he] is underestimating how bad this issue actually is.

The author graduated from UA in 2014 with a degree in biochemistry.