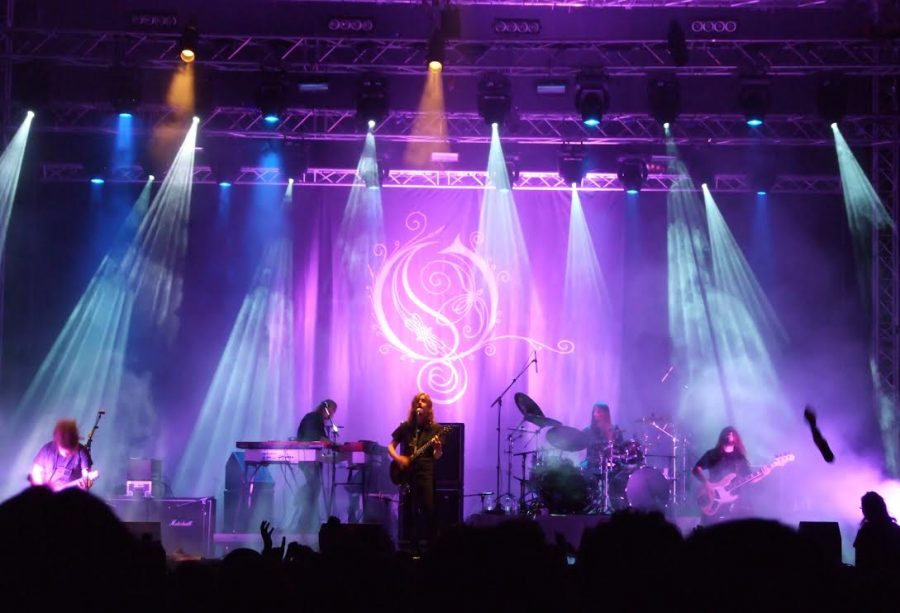 The band released its latest album (and 12th studio album) “Sorceress” on Sept. 30 to near-universal acclaim and embarked on a tour that will take them across North America, Europe, and Australia.

Opeth performed to more than 1,100 fans at the newly-reopened Goodyear Theatre over the weekend, which is part of the redeveloped Goodyear Campus in The East End of Akron.

Opening for Opeth was Texan metal band The Sword, a group that echoes the energetic and scorching sound of its influences, including Black Sabbath and the impossibly loud Blue Cheer.

The Sword’s classic heavy metal sound was widely enjoyed by audience members. They received loud applause as they concluded their set.

The crowd of fans, ranging from young children to old metal-heads, filled the seats to watch their beloved band Opeth ignite the stage. As the stage lights gave form to Opeth front-man Mikael Åkerfeldt, a thunderous roar erupted from the crowd.

Many fans at the concert had seen the Swedish metal band many times before, but the show is always new and fresh. Opeth has been recording and performing music for nearly three decades and their sound has grown, changed, evolved, defied, and attracted the admiration of many thousands of fans and music critics.

Sean Carl, a musician from Brecksville, has “seen Opeth too many times to recall over a span of 10-plus years,” and was ecstatic to see them live in Akron.

“Sorceress” is a blindingly-entertaining progressive metal album, a sonic style the band explored and developed on a previous album called “Damnation.” It features a wide variety of musical soundscapes and warrants listening to in a dark room with the volume up.

The band performed several songs off its latest album and captivated listeners with old favorites. The songs have waves of distortion mixed with bluesy solos and acoustic segments. Cascading over the auditory assault was a foreboding lightshow featuring a glowing matrix of geometric patterns behind the band.

In between songs, Åkerfeldt addressed the audience in his warm and tranquil demeanor. Despite the hard edge of the music and the dark tones, his jovial commentary drew laughter and cheers from the audience.

The seemingly unfunny explanation of “[flying] in an airplane from Sweden to America” transforms into some twisted form of deadpan humor when delivered via Åkerfeldt’s Swedish accent. Though he is Swedish, Åkerfeldt sings in English and uses a mixture of clean and dirty vocals.

The intricacy of Opeth’s progressive sound was captured and resonated beautifully in Goodyear Theatre. The natural acoustics in the music hall have been widely praised by audiences and performing musicians alike, says Ben Barr, the Theatre’s deputy general manager. The crisp, clear definition of each instrument and tonal change could be entirely heard and appreciated without being overloud or requiring ear plugs.

The Goodyear Theatre, which at one point was part of the former Goodyear world headquarters, was “built in the 1920s as Goodyear’s playground,” Barr said. The music hall in the Theatre was used solely for Goodyear purposes, until July of 2016 when the current form of the Theatre opened to the public and quickly became a popular destination for bands and performers.

The Theatre is located on East Market Street, roughly two miles east of The University of Akron, making it an ideal location to catch a brilliant performance not far from campus.

Through Goodyear Theatre, Barr is working to bring larger bands to Akron, a city with a rich musical culture that deserves great shows. He says he works with a large variety of artists and that the Theatre “has something for everyone.”

For those uninitiated, “Sorceress” can be found on Spotify and deserves a thorough listen.