How clear-cut are right and wrong? 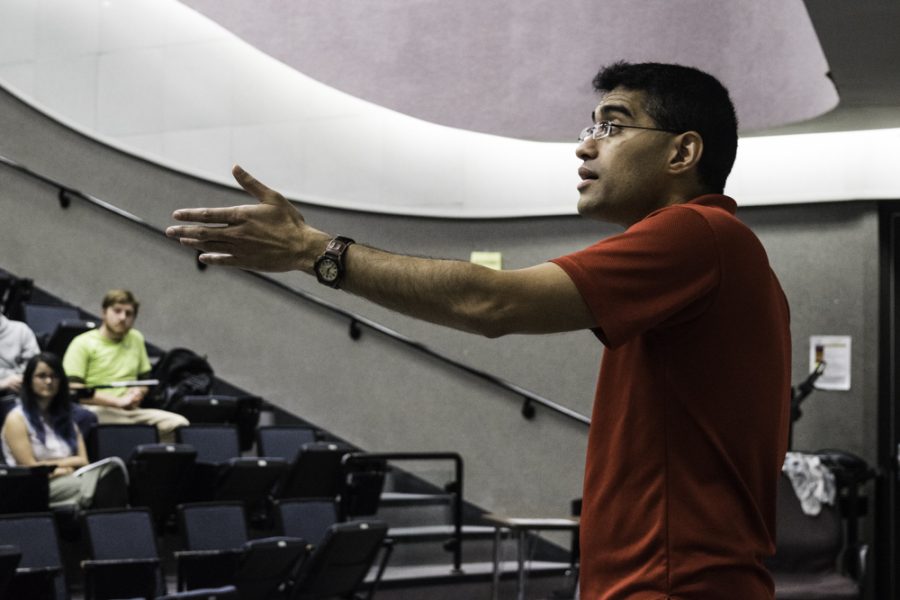 Nei Sinhababu spoke to a crowd of about 80 students Tuesday night.

Though it sounds forbidding, “scalar consequentialism” might not be so difficult of a concept.

This is what Neil Sinhababu, philosophy professor at the National University of Singapore, came to UA to talk about on Tuesday, Oct. 11, in a lecture called “Scalar Consequentialism the Right Way,” which about 80 students attended. It was hosted by UA’s philosophy club.

In other words, rightness and wrongness are scalar – they lie on a continuum, just like the words “better” and “worse” or “hot” and “cold” (i.e., things can be good, better or best; bad, worse or worst; hot, hotter, or hottest; cold, colder or coldest).

Among other uses, remembering this idea, Sinhababu says, helps with things like moral evaluation.

In his talk, Sinhababu gave the example of a fictional character, Betsy, staying home to play video games instead of seeing a movie she promised to watch with her friend Daniel. Daniel is frustrated – and rightfully so, because what Betsy did was wrong. However, Betsy could have done much worse. She could have ditched Daniel and robbed his house, or ditched Daniel and attacked people on the street, instead of just playing video games. So what she ended up doing was much less wrong than what she could have ended up doing.

“I think most students start [philosophy] off with a religious or relativistic intuition,” said Priscilla Sakezles, professor and chair of UA’s philosophy department. “[Utilitarianism] is kind of challenging for them, but it’s a very logical theory.”

“The good thing about utilitarianism is how realistic it is, how well it maps onto reality,” she continued. “So many ethical theories say ‘this is right’ and ‘this is wrong,’ and reality’s not like that.”

Sinhababu adopted utilitarianism during his freshman year of college at Harvard. Since, he has been refining his positions on it, with the details of scalar consequentialism being a recent development.

“I came into it just interested in hearing the talk, and because I’m opposed to [utilitarianism],” Barrett said. “I think there are very good principles within it, but I just don’t think it’s a good, complete system.”

UA’s philosophy club usually meets every Thursday at 6 p.m. on the third floor of the Student Union. More information about philosophy events and groups can be found on uakron.edu/philosophy.