Orange is the new blue 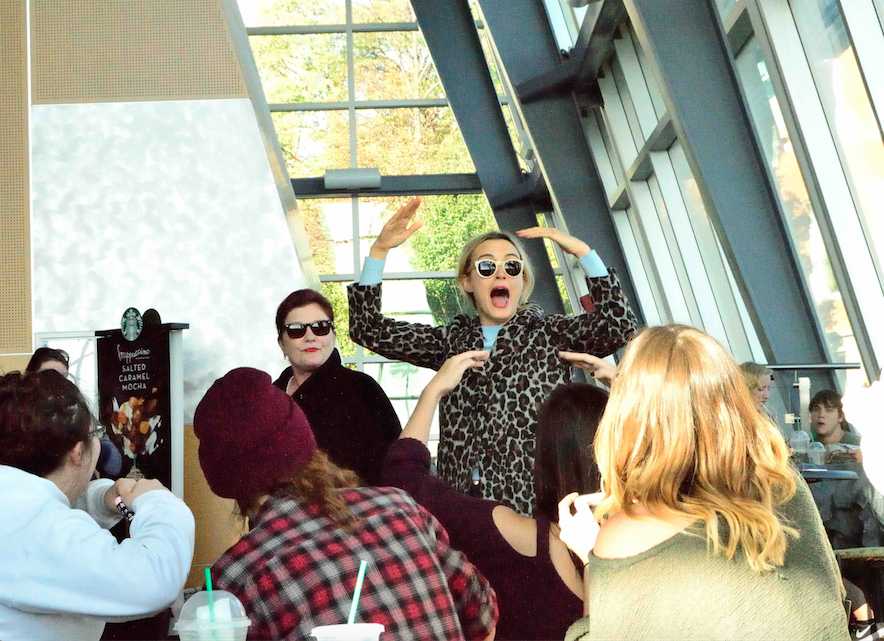 Orange is the New Black stars Kate Mulgrew (who plays "Red") and Taylor Schilling (who plays "Piper") spoke at the Union on Friday.

Last Friday, Oct. 14, The University of Akron brought two stars from the hit Netflix series “Orange is the New Black” to the Student Union Starbucks for a talk on politics and the 2016 presidential election.

Kate Mulgrew (“Red”) and co-star Taylor Schilling (“Piper”) came to UA as part of a nationwide campus tour for Get Out the Vote (GOTV) efforts.

As a television show, “Orange is the New Black” may not specifically deal with politics, says Sara Yusefi, president of UA’s College Democrats; but because it has a wide appeal, having its stars speak personally to college students about the election helps to raise awareness.

“The point of this event is, for those who aren’t politically inclined, to get them involved and get out and vote,” Yusefi said.

Mulgrew and Schilling each gave a short but engaging speech following an introduction by David Pepper, chairman of the Ohio Democratic Party.

Both actresses spoke about the risk of “sitting on the fence” in this election. Mulgrew said that most young people she has talked with have said that they don’t care about voting and may not vote at all.

“It’s called indifference, and it doesn’t fly – if you don’t vote, it’s a vote for Trump,” Mulgrew said. “Talk to people who are sitting on the fence, [and] please don’t be afraid to say, ‘get off the fence.’”

Schilling said that she understood how students may be feeling about this unusual election.

“[Recently] I became aware of my own political malaise,” she said, and realized that without good government leadership, there was a chance that some of her fundamental rights and privileges could be taken away.

According to Mulgrew, the choice for good leadership is clear.

“[T]his is the election cycle in which we must vote for and elect Hillary Rodham Clinton,” Mulgrew said. “I don’t think that there is any chance that Trump is on anybody’s mind in this room, because you’re thinking people.”

David Pepper agreed, saying, “If you’re a first-time voter, I just want you to know that what we have seen in the last six months with Donald Trump is not normal…And the best way to make sure this never becomes normal is if we win this election big. Win big, win blue this November.”

Knowing that this election is particularly critical, College Democrats have kept busy this season.

“We did registration events every day before [the Oct. 11 deadline],” Yusefi said. “The night before early election started, we had a campout, so you could be the first person to vote for Hillary Clinton in Ohio.”

For those students who want to get involved in the crucial weeks before Nov. 8, Pepper and Yusefi had some advice.

“Don’t vote late: vote early,” said Pepper. “There’s no reason to wait until Election Day. You never know what the weather will be like, or if you’ll have a transportation issue or anything else.”

Yusefi said that College Democrats plan to do whatever they can to increase voter turnout.

“Our GOTV events are coming up, so we’re going to go door-knocking, [trying to get] people out who maybe aren’t interested in voting,” she said.

College Democrats meetings are held every other Tuesday from 6:30 to 8:00 p.m. in Student Union Room 308, for those who want to find out how to join the GOTV effort.

The most important thing, all the speakers agreed, is not to be apathetic about voting.

“It’s not like the planet is at stake,” Schilling joked. “Just kidding, because it is.”
Reporting contributed by Celeste Houmard. [email protected]