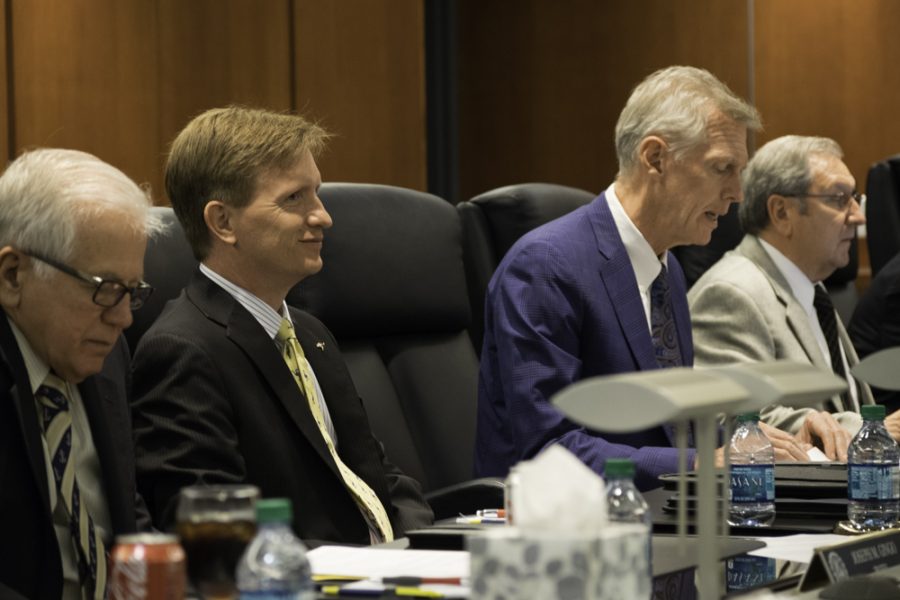 Last evening the Board of Trustees named former Interim President Matthew Wilson the permanent president of UA despite concerns from faculty.

The Board approved the removal of the term “interim” from the titles of Wilson and Interim Senior Vice President and Provost Rex Ramsier.

The two appointments were made to create “stable academic leadership” at UA and to avoid an “expensive search process,” according to Board Chair Roland Bauer.

When Wilson was appointed interim president on July 11, the Board outlined five priorities for him: to develop a sustainable budget, to increase enrollment, to progress in increasing student retention, to rebuild and strengthen relationships, and to grow development efforts.

“I am gratified to report that Matt is well on his way to meeting or exceeding those high expectations,” Bauer said.

The public session of last night’s meeting was scheduled to start at 5:30 p.m., but started at 8 p.m. due to a long executive session.

Wilson’s term will continue until June 30, 2019, though it was originally scheduled to end on Dec. 31, 2017. Both he and Ramsier will not receive an increased salary.

By June 2018, the Trustees plan to start a process to meet with constituency groups, including faculty, to determine if a search is necessary when Wilson’s term ends.

According to Wilson, the naming of him and Ramsier in permanent positions was partially in response to the Ernst & Young auditing of UA and the Higher Learning Commission accreditation review. He also mentioned removing the term “interim” from his title in order to ensure the stability of UA moving forward.

The Faculty Senate, University Council, and Akron chapter of the American Association of University Professors (Akron-AAUP) sent three representatives to the meeting to express their concerns before the decision took place.

Akron-AAUP was notified of the special meeting on Friday, allowing six days to prepare its recommendations to the Board. The University Council and the Faculty Senate were informed about the decision on Sunday.

Although many of the representatives agree that Wilson has performed well as interim president, much of their concern stems from the early appointment and lack of a national search for UA’s next president.

“We thought that the process took place too early and that more deliberation should take place,” said Harvey Sterns, chair of the University Council.

The Akron-AAUP conducted a survey among the faculty. Following the meeting, John Zipp, president of the organization, said that its position presented to the Board dealt with the issue of “shared governance.”

According to Zipp, the Akron-AAUP stressed the importance of conducting a national search for the next UA president following the 18-month term limit originally set for Wilson.

Instead of a decision by “informed consent” after consultation with faculty, Zipp said the move “feels a lot more like notification.”

“I really am humbled to serve the students we have here, the prospective students that hopefully will come, and the city as well,” Wilson said. “I’m excited to have an impact on students because they are the leaders of the future.”