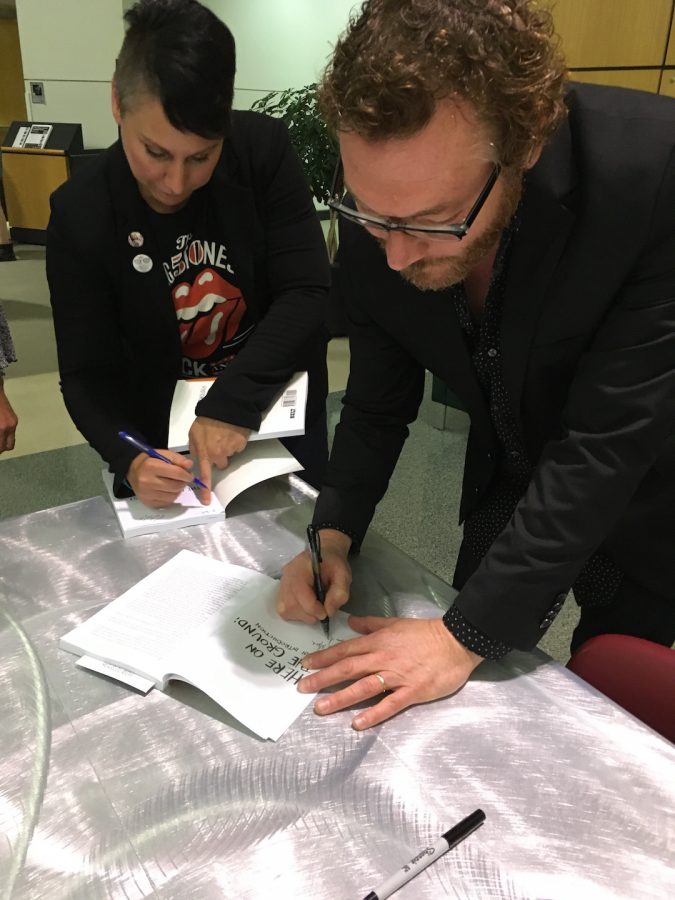 In a release party at the Akron Public Library on Tuesday, Belt Publishing released its eighth city anthology, “The Akron Anthology,” which is a collection of essays about the city of Akron, by the writers of Akron – and you may recognize some of their names.

These books focus on cities in the Rust Belt, which is a large strip of land in the northeastern and midwestern U.S. characterized by declining industry and falling population, that are now reviving as centers of unique culture and development. Belt has published other anthologies on Detroit, Cleveland (2), Pittsburgh, and Youngstown, to name a few.

“There’d better be a blimp in here,” it starts. “Seriously: if there is not a blimp in this book, I’m going to return it to the library I stole it from.”

At Tuesday’s release, Giffels read this and more from his piece in the book, and was one of three other featured authors who did readings of their essays, along with editor Jason Segedy, who is Akron’s director for Planning and Urban Development.

Before he spoke, Giffels encouraged anyone in the large audience to interrupt him with news of the Cleveland Indians’ potential World-Series-clinching game.

“You didn’t miss the last game of the series!” someone shouted after Giffels finished his reading.

“It’s not over yet, there are still two innings left, we’re only down 3-1,” another person yelled.

“Way to be optimistic,” Giffels joked to the first person’s comment. “That’s so Akron.”

But just what does “so Akron” mean? Well, the rest of the anthology is meant to give an answer.

Fellow UA English professor Chris Drabick also had a piece in the book, “Foreclosures and Vampire Devils: A Guide to Buying a Home in Akron,” from which he read on Tuesday night.

The other readers included Joanna Wilson, who wrote about Archie the Snowman in the Chapel Hill Mall; and Emilia Sykes, representative for the 34th district of the Ohio House, who wrote about how “There’s No Place Like Home.”

Sykes teared up when she got to the last paragraph of her piece, which explained how, though she once had thought she wanted to move away permanently from her hometown – and travelled extensively to do so – she could not help but return to Akron in the end.

Among many others, “The Akron Anthology” includes an essay by former U.S. poet laureate Rita Dove.

The book costs $20, and you can order it from beltmag.com, where you can also find other information on Belt’s books.