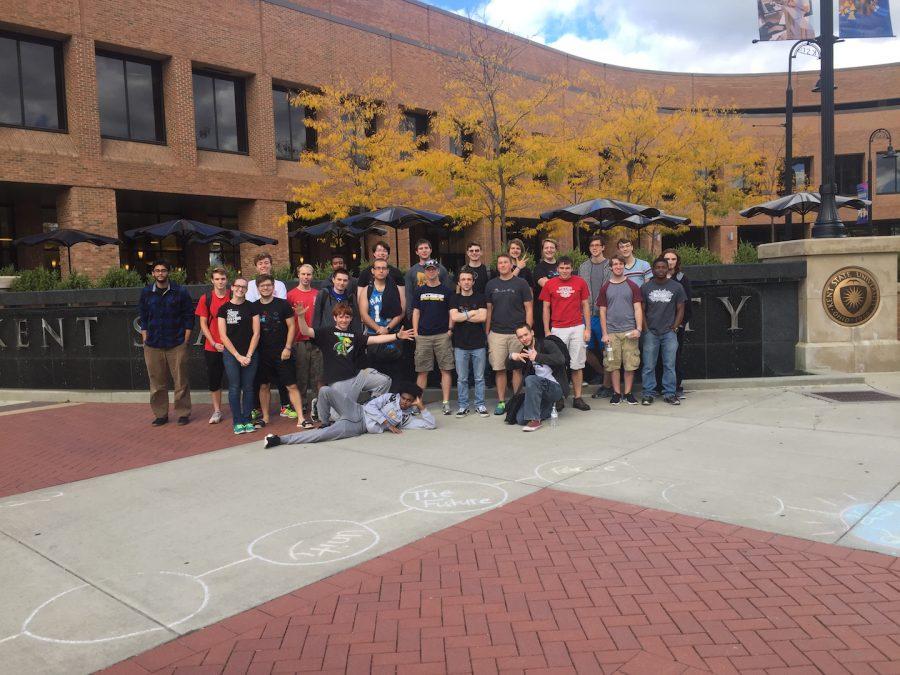 HAkron members pose for a picture at the recent Kent State hackathon.

In the print version of this article, “HAkron” is incorrectly spelled as “Hakron” (with a lowercase “a”) everywhere it appears. We’re sorry about that.

There is a new group gaining popularity on campus whose main business is – hacking.

At least that’s what it’s name would suggest. “HAkron,” a group for those interested in computer science and programming, was formed this year and now boasts around 40 members at its weekly meetings, as well as more than 80 members online.

“Our goal is to build a community of makers to come together and learn and make things,” said HAkron president Matthew Morris. “We’re trying to help [our members] gain real-world experience. A lot of times in the computer science field, you work on class projects but you’re really not job-ready in any manner.”

Morris is a junior computer science student who has been programming for about 6 years. He helped to send around 30 members to a recent “hackathon” at Kent State University, at which HAkron teams won three out of the top five spots, including first place, out of around 40 teams.

Hackathons are events where competitors, in teams of two to four, have usually 24 to 36 hours to identify and analyze some real-world problem and come up with a solution for it.

Not all Hackathon creations are for “real-world problems” though. For example, HAkron’s first-place team at the Kent State competition created Go-Go-Pro, which uses image processing software to take a picture of the board game “Go,” score it, and then upload it to an online medium where players can continue to play.

The team’s first-place spot was mostly because of the project’s technical difficulty, according to Morris.

The fourth-place team created an app to help reserve study rooms in libraries, while the fifth-place HAkron team made a home automation software that can, for example, open and close blinds depending on the amount of light hitting them, or according to a schedule.

HAkron member Lilith Freed went to the Kent competition, which she said was a “crazy, sometimes stressful party from beginning to end.”

“[But] I was pretty shocked to find [that] no one was really cutthroat,” Freed said. “It’s refreshing to have a positive space in tech that’s open and welcoming, especially with how many barriers there have been across the years.”

Morris says HAkron has two major goals for this academic year. One is to send 100 HAkron members to The Ohio State University’s hackathon in November, which already draws around 700 students each year. An information session for this trip will be held next Wednesday, Oct. 26, at 7 p.m. in the Honors Complex room 92 (the same spot where HAkron meets every Friday from 5 to 7 p.m.).

The other goal is to host its own hackathon at UA by the end of spring semester.

Morris encourages anyone to come to the group’s Friday meetings, and stresses that it’s not just for computer science or engineering students, but is interdisciplinary.

More information can be found by emailing Morris at mjm184@zips.uakron.edu.