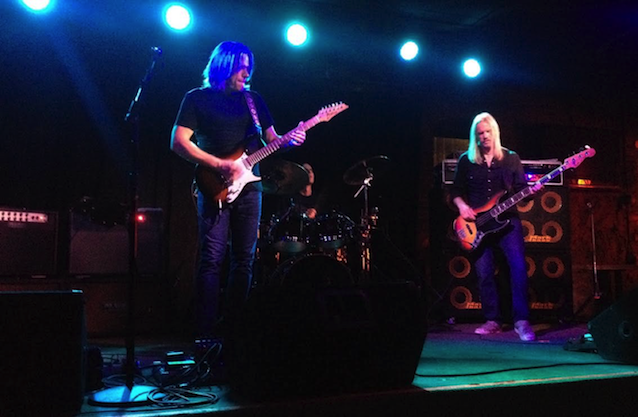 Andy Timmons (on left) ignites the crowd with his frenetic guitar playing.

For a surreal 60 minutes on Tuesday evening, the audience of Akron’s Musica marveled at the sonic virtuosity of Texan guitarist Andy Timmons.

In his first ever trip to Akron as a touring musician of 28 years, Timmons electrified the crowd with blazingly quick guitar playing, an avalanche of aural tone drenched in razor sharp distortion, and his amicable stage presence.

Timmons and his band — The Andy Timmons band — played songs from their newest album, “Theme to a Perfect World,” which was released on Sept. 30.

The band is on tour with the Travis Larson Band, another musical outfit centered around its guitarist. Both bands consist of a trio of guitarist, bassist, and drummer.

Contrary to most contemporary music heard on the radio, the Andy Timmons Band has no need for a vocalist. The highly intonating playing style of Timmons conjured a complex character that spoke for itself.

Many at the show were familiar with Timmons brand of fast, intricate, and entertaining music and were ecstatic to finally have the guitar slinger make noise in Akron.

In addition to its own material, the band played covers of Beetles songs from the album “Sgt. Pepper’s Lonely Hearts Club Band.” Timmons has covered the Beetles’ “Strawberry Fields Forever” at previous shows, where the audience’s reception was very positive.

Timmons has also arranged and covered “Sgt. Pepper” in its entirety. His rendition immediately received critical reception from guitarist magazines that noted the brilliant arrangement of playing the rhythm and vocals of the original album with only his guitar to speak with.

Dave Davis read about the album in a magazine several years back and has been an Timmons fan ever since. Davis saw Timmons for the first time on Tuesday evening. “[Timmons] live performance was somehow even better than the brilliance he captures on his studio albums,” Davis said.

Davis mentioned that a lot of acts can cut a great album, but the live sound leaves something to be desired. “One [of Timmons’] songs alone was worth the price of the ticket,” Davis said, grinning.

After the set was over, Timmons immediately went into the encore performance as Travis Larson joined him onstage, guitar in hand. Like the final calm before the storm, the pair started slow before finally unleashing a frenzied guitar attack that left the crowd applauding.

The Andy Timmons Band and the Travis Larson Band took the stage one last time to bow and thank Akron for the “small but mighty crowd,” as Timmons stated.