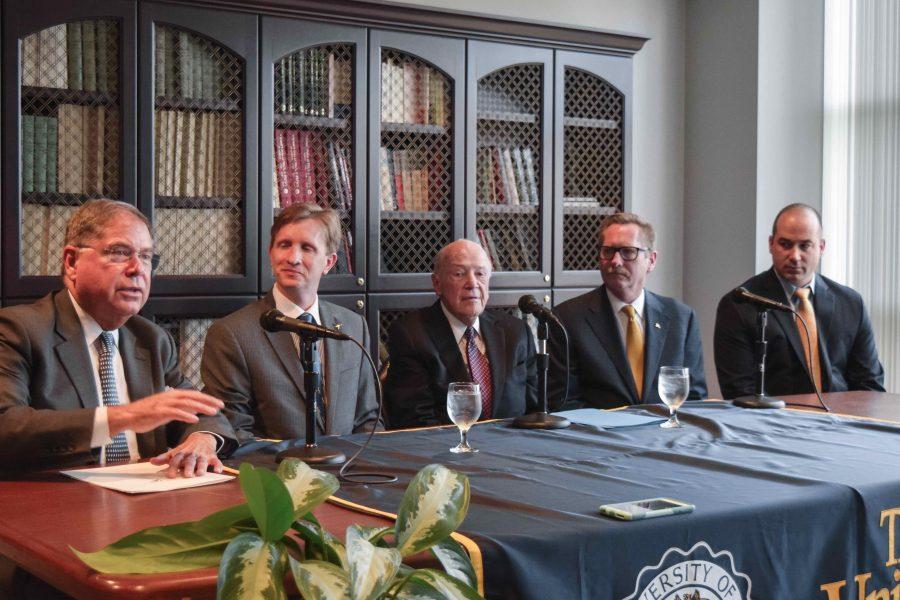 The John S. and James L. Knight Foundation gave a $3 million endowment to enhance research in polymer science and engineering at The University of Akron.

Announced on Tuesday during a luncheon at the Goodyear Polymer Center, the gift will fund the new W. Gerald Austen Endowed Chair and various polymer research projects that the chair oversees.

The position was created in honor of surgeon and former Knight Foundation Board Chair Dr. W. Gerald Austen and his contributions to the community.

Austen served on the Knight Foundation’s board of trustees for 24 years and as chair for 14 years.

After growing up in Akron, Austen studied at the Massachusetts Institute of Technology (MIT) and received his medical degree from Harvard. For the last 70 years, he has lived and worked in Boston. In 1980, he received an honorary doctorate degree from UA and currently serves on the president’s advisory board.

“I’ve always been very fond of Akron and I consider it my second home,” said Austen. “Every great city needs a great university and I feel that The University of Akron is crucial in Akron and is important to determining the city’s future.”

Austen spoke of his mother who graduated and taught languages at UA. In 1995, she received the UA’s presidential medal for her accomplishments and support.

Knight Foundation President Alberto Ibargüen was also present to announce the funding at the event Tuesday.

“Dr. Austen was the leader and the inspiration and the evolution of the Knight Foundation from a small, company-oriented foundation to a national foundation,” Ibargüen said. “It simply would not have happened without his vision, his imagination, his tenacity, and his insistence.”

Engineering Professor Matthew Becker will be the first to hold the new position, which is the largest endowed chair at UA.

“This has been a really stunning surprise. It’s pretty incredible what the Knight Foundation does in all its communities,” Becker said. “This gift for a university is really significant. It represents turning the page and establishing more medical type of materials and trying to grow what we’re doing here nationally.”

Within the field of polymer science, Becker’s team researches new medical devices and regenerative medicines. Supported by the National Science Foundation, Becker’s team is sharing a $6 million grant from the U.S. Army with other institutions to develop bone regeneration techniques. Becker has been at UA since 2009.

The funding provided by the endowment will go directly to projects led by or involving the  W. Gerald Austen Endowed Chair. Becker will serve as the chair until he retires or leaves the position, according to Austen.

During the announcement, Wilson emphasized that Akron’s strength in polymers is giving Akron a competitive advantage among other universities.

“Ohio is home to the largest polymer industry cluster in America, and many Akron-area businesses are part of this industry,” said Wilson. “The polymer research made possible at the university by this endowment will benefit the region on many levels.”

The Knight Foundation, which invests in places where the Knight brothers owned newspapers, has funded the Akron community for years. Since the 1950s, the foundation has provided UA with 27.5 million in funding, according to Ibargüen.

According to Ibargüen, the donation was something the foundation was thinking about since Austen’s retirement seven years ago.

“With Dr. Becker as the chair and with the new administration, this is a good time for people who are interested in the success of UA to reconnect.” said Ibargüen.

President Wilson mentioned the significance of the gift.

“This donation personifies the value of the university to the community and the impact it has,” said Wilson. “We can involve medical technologies in developments. We’re excited to play that role as a University and look forward to building upon this gift and educating a whole new generation generation and furthering the research of Dr. Becker.”