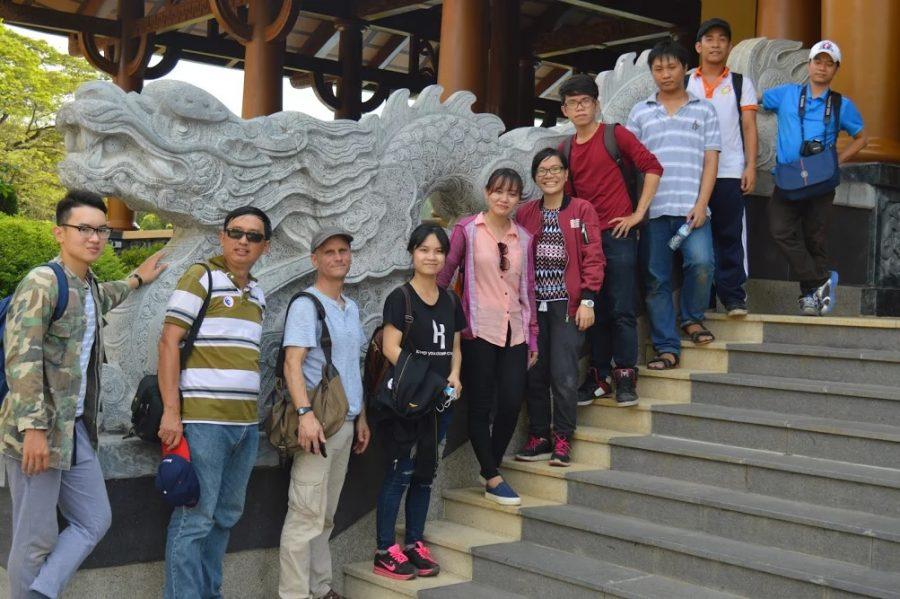 In the summer of 2016, UA English professor Patrick Chura’s Vietnam literature course looked very different than it usually does. Twenty-one Vietnamese students joined him at Ho Chi Minh City Open University, a college in southern Vietnam, where they talked about the War of American Aggression — or, as we call it, the Vietnam War.

This war, which divides the country to this day, is still a sensitive and even censored topic in Vietnam. Chura, along with his students, spent part of the summer recovering some of the voices of those affected by the conflict. These voices, which they put into a play called “Voices of Vietnam,” will be performed on Nov. 9 in the Daum Theater of Kolbe Hall by Chura’s senior seminar class.

Chura went to Vietnam over the summer on a Fulbright Specialists Program grant. He left for his five-week stay on May 4 to teach a course called American Literature of the Vietnam War, which Chura describes as a shortened version of his senior seminar. The class includes many of the same texts he assigns his Akron students, such as novels and memoirs by Viet Thanh Nguyen, Tim O’Brien, and Philip Caputo, and poetry by Denise Levertov.

Chura also shared popular American music from the period. He says his students’ favorites included songs by Pete Seeger, Joan Baez, The Like, and Bruce Springsteen.

The course ran for four weeks. Chura and his students met every day between Monday and Friday for two-and-a-half hours. After class, Chura would invite two students to join him for tea. Tea with Teacher, as Chura called it, gave his students the chance to practice their English, and it helped introduce Chura to the unfamiliar culture.

Between class time, faculty meetings, and Tea with Teacher, Chura says he barely had the time to feel the cultural shock that people often experience abroad. He even offered his own bit of advice for travelers: stay busy.

Tea with Teacher also gave Chura the chance to explore Saigon. Chura paused when he said the name of the city.

As the capital of the republic of South Vietnam, the city was called Saigon up until 1976. After the North won the Vietnam War, it was renamed Ho Chi Minh City after the Communist revolutionary leader. Today, the city is the country’s largest. “The government says you’re supposed to call it Ho Chi Minh City,” Chura says. But, unofficially, many still say Saigon.

These lingering differences between the North and South are still an enormous part of Vietnamese life. The country, 41 years after its reunification, is still not completely whole. Chura says one of his students told him that “[Vietnam] is unified, but at a cost.”

“Many of the people in Ho Chi Minh City have complicated feelings about the war,” Chura says. A lot of people helped the Americans. After the war,  many people in southern Vietnam were forced into reeducation camps, where they were tortured and indoctrinated.

He told Chura that he recalls helicopters flying over his neighborhood overloaded with escaping Americans and Vietnamese. Watching them leave, Hung felt betrayed. His father helped the Americans during the war, and now they were abandoning them. Hung told Chura that, after the war, his family fell apart. Some left the country while others, including his father, were forced into reeducation camps.

These are the perspectives that Chura explored with his class. The course culminated with an oral history project inspired by a play called “May 4th Voices” by David Hassler. The play’s script is based on Kent State University’s own oral history project, a collection of interviews, personal reactions, and other first-person narratives that retell the Kent State shootings of May 4, 1970.

When he mentioned the play in class, Chura’s students were eager to learn more. “They were interested to think about American citizens protesting against what was happening in Vietnam,” Chura says. “And they were shocked to learn that something like killing four students on a campus in Ohio could happen in a country with free speech and the right to free assembly.”

“Freedom of speech, per se, does not exist in Vietnam,” Chura explained. The socialist government carefully monitors public discourse, and it’s even begun cracking down on the younger generation’s efforts to talk about the war.

When Chura’s students began their own oral history project, he says they were apprehensive. They started by interviewing their parents and grandparents about their memories of the war. “You’re gonna censor these interviews, right?” his students asked. He told them no.

His students transcribed and translated their interviews into English. Chura edited and scripted them into six scenes with characters and a narrative. He titled the project “Voices of Vietnam.”

Chura says that the play became a rare opportunity for the students to speak out about the war, and many became excited by this chance.

Others were less enthused. Many older generation Vietnamese were hesitant to speak about the war. The students had to try three or four times before they agreed to an interview. Faculty members at the university warned Chura that the government would not like what he was doing. When they performed the play, an audience member stopped Chura during the intermission. “Do you know what you’re doing is strictly forbidden in this country?” he asked.

Chura says the audience member claimed that the play wasn’t true. But it is true, Chura says. It’s the truth of the people affected by the war. “All we [were] claiming to do is express what people said, so it’s automatically the truth. We [were] speaking the words of people interviewed and the play is about what they said.”

Chura’s favorite memory of the trip was when his class finally performed the play at the beginning of June. He says that the audience was captivated by the performance and content. They were shocked by how openly the students were speaking about the war.

At the end of the play, in the section where the Vietnamese students share their own voices, they urge the older generations to talk to them about the war.

“[My students] wanted the older generation to start telling them real stories,” Chura says. The government gives students a limited version of the war in its history books, but Chura says that “you can feel a lack of freedom to speak out and voice dissenting opinions [in Vietnam’s educational system].”

And the younger generation is beginning to question this.

Chura’s senior seminar class will perform the play tomorrow, Nov. 9, in the Daum Theater of Kolbe Hall. The play is free to attend and begins at 2:30 p.m.