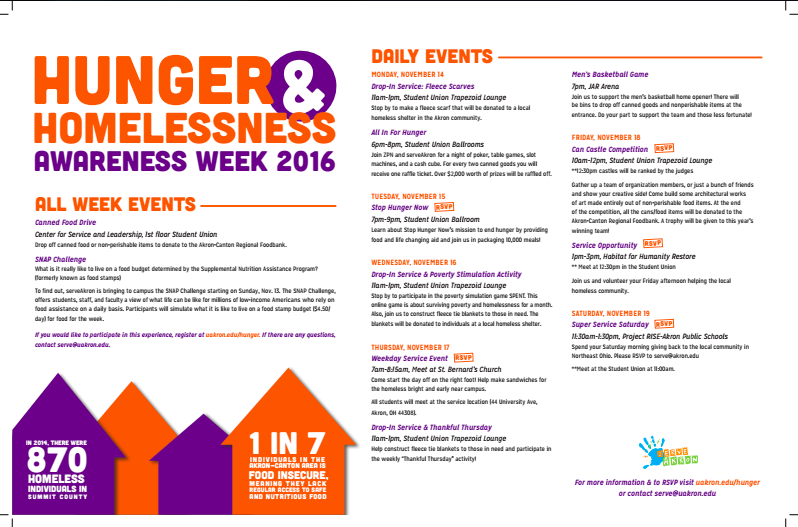 This week, The University of Akron’s civic engagement program serveAkron is highlighting the issues of hunger and homelessness in Akron and the surrounding areas. Hunger and Homelessness Awareness Week includes a number of food drives and service events on and off campus.

Dina Daltorio, a graduate assistant with serveAkron, says the week “seeks to bring greater attention to the difficulties that the homeless and hungry face on a daily basis.”

The nationally recognized event is part of an ongoing effort to promote awareness of the large numbers of families and individuals experiencing food insecurity (not knowing where the next meal will come from) and living without stable and permanent shelter, not only in Ohio but across the country.

In Ohio, almost 2 million people are food insecure, or one in seven people in the Akron-Canton area alone. In 2014, almost 900 individuals experienced homelessness in Summit County. Statewide, the number of homeless people is almost 12,000.

The important work done by serveAkron, and the students and community leaders involved, has not gone unnoticed. The Hunger and Homelessness Awareness Week 2015 program earned the Outstanding Service Project of the Year award from the Association of College Unions International. Over 430 students took part in 14 different programs during last year’s Awareness Week.

This year’s Awareness Week activities began last night, when the Zips Programming Network (ZPN) and serveAkron hosted a casino night and collected canned food items from students. Two canned goods earned donors a raffle ticket and over $2,000 in prizes was claimed by the lucky winners.

During the day, in the Student Union Trapezoid Lounge, students were invited to make fleece scarves that will help keep the residents of a local homeless shelter warm this winter.

The Trapezoid Lounge will be the home of other events this week. On Wednesday from 11 a.m. to 1 p.m., students will gain perspective into the hardships many Americans suffer and take part in a poverty simulation called SPENT.

Also in the Lounge from 10 a.m. to 12 p.m. on Friday, there will be a “Can Castle” competition. Teams will be building structures out of donated canned and other non-perishable food items. These tasty edifices will be judged at 12:30 p.m., and all donated items will go the Akron-Canton Regional Foodbank.

Service projects this week range from fleece blanket making to volunteering in the community. Tonight over 10,000 meals will be packaged in the Student Union Ballroom. “Stop Hunger Now,” an organization that has provided almost 300 million meals around the world, will be promoting the mission to end hunger and educating attendees.

On Wednesday morning from 7:00 a.m. to 8:15 a.m., St. Bernard’s Church will have UA students making sandwiches for the homeless.

This Saturday, Nov. 19, is a Super Service Saturday, where students will be working with Project RISE and Akron Public Schools.

During November, serveAkron is also hosting a holiday Hat and Glove Drive and a Giving Tree Donation Drive. This will benefit the local organizations Snow Angels and Akron Hope.

Many of the events during Hunger and Homelessness Awareness Week require an RSVP. Be sure to visit uakron.edu/hunger to RSVP and to find out more information on the week’s schedule. For other service opportunities with serveAkron go to uakron.edu/studentlife/serve or send an email to [email protected].