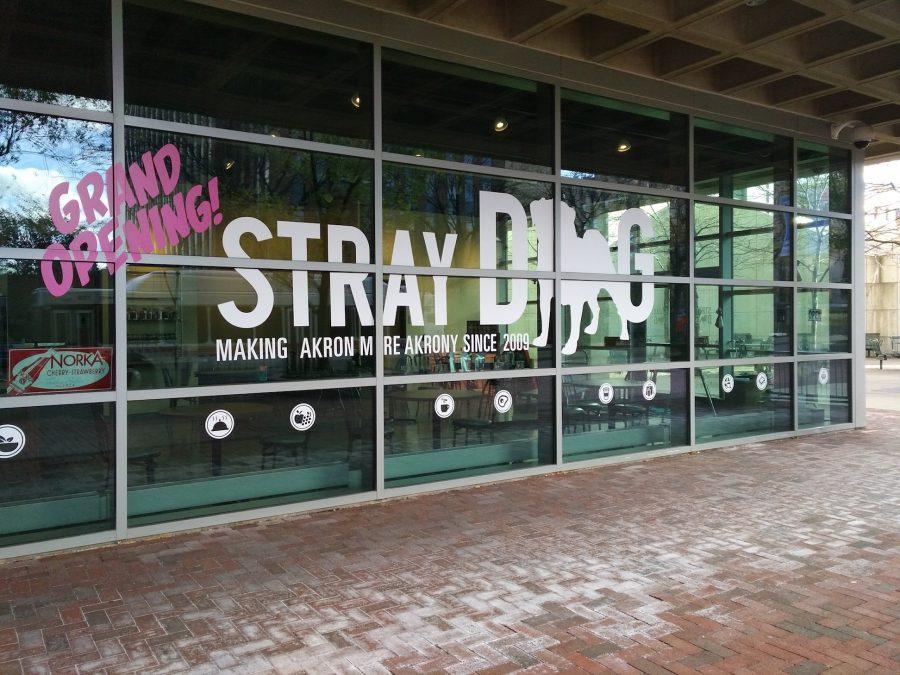 Imagine you’re studying at the Akron Public Library downtown and your stomach lets out a deep rumble. You have so much work to get done that your growling stomach is an inconvenience. You need something quick. Don’t worry, I know the perfect place for you.

Stray Dog Cafe, which stemmed from the Stray Dog Cart, a traveling food cart business in Akron, opened a shop in downtown Akron just a few weeks ago. The cafe is located next to the library door on Main Street.

Stray Dog Cart was created in 2009 by owner and cook Charly Murphy. Despite opening a cafe location, Murphy still operates food trucks, catering events like The National Hamburger Festival, Rib White and Blue Festival, and Lock 3 concerts. Murphy and Stray Dog Cafe manager Alicia Kennedy have been working together with the carts since the business began.

The food carts are most known for their hot dogs with some unexpected toppings like macaroni and cheese which Kennedy described as a fan favorite. Murphy typically prepares tacos, burgers, hot dogs, street pizzas, and brisket on the food carts.

The menu inside the cafe is different than that of the food carts, says Kennedy. They have sandwiches, paninis, soups, salads, fruit bowls, pastries, hot dogs, wraps, and breakfast items like sandwiches and waffles, and coffee and espresso drinks. Kennedy said brisket and corned beef is good comfort food for nearby college students.

Sick of paying $5 for an espresso pick-me-up? The prices for espresso drinks at Stray Dog Cafe are competitive. Kennedy said that the price is $3.50 no matter how many flavored syrups you add — a price which I’ve never seen elsewhere.

Students should come to Stray Dog Cafe to take a break from classes. The manager said the cafe already gained a few students who have become regulars.

And with a slogan like, “making Akron more Akrony” you have to try Stray Dog at least once.