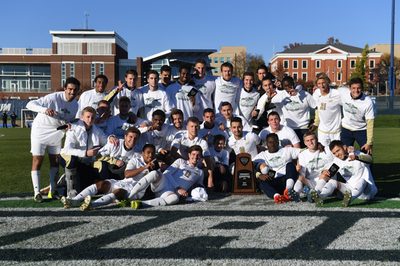 The University of Akron men’s soccer team captured its 13th MAC championship this past weekend right here in Akron. After defeating Western Michigan for the second time this past week on Friday by a score of 4-0, the Zips held on to a 2-1 lead in the championship match on Sunday to outlast Buffalo.

On Friday, the Zips took the field at 7 p.m. versus Western Michigan. It was in the 23rd minute that junior Stuart Holthusen started off the scoring, netting his fifth goal in three games. His offensive efforts also earned him National Player of the Week.

Although that goal would be all the Zips needed for a win, they were far from done scoring on Friday night. In the 35th minute, a risky takedown in the box resulted in a penalty kick for junior Sam Gainford. He would put away the PK for his fourth goal of the season. The Zips would take a 2-0 lead going into halftime.

Shortly after play continued, freshman Marcel Zajac gave the Zips a 3-0 lead in the 53rd minute. The Zips’ final goal would come in the 60th minute when redshirt sophomore Ezana Kahsay scored off an assist from teammate Jonathan Lewis. The assist was a team-leading 10th for Lewis. Sophomore goalkeeper Ben Lundt registered his 10th shutout of the season as the Zips advanced to the championship game.

It would be Akron vs. Buffalo to determine this year’s MAC champion. The Zips started off the game in full on attack mode, registering a 13-0 advantage in shots in the first 30 minutes. The Zips could not seem to find the back of the net after coming very close to scoring on three different occasions.

It wasn’t until the 32nd minute that freshman Nick Hinds would find the back of the net to give Akron a 1-0 advantage. That would be the score at halftime. Hinds would once again score in the 52rd minute after scoring a goal off an assist from teammate Jonathan Lewis.

The Bulls did not even register a shot until the 63rd minute when Russell Cicerone scored on Buffalo’s first shot of the game. The Zips strong defensive effort continued as they only let the Bulls register one more shot on goal for the rest of the contest, which sophomore goalkeeper Ben Lundt was able to save. The final whistle sounded and the Zips had won their fifth consecutive MAC Championship.

The Zips will play Villanova in the first round of the NCAA tournament right here in Akron this Thursday at 4.p.m. Be sure to come out and support your Zips as their quest for the College Cup officially begins.

Students should be aware that they can pick up their free tickets at different places throughout the week. Zipcards will not be able to be used to get in. Check the Akron soccer Twitter page (@ZipsMSoc) for more details.