A look inside a march against Trump 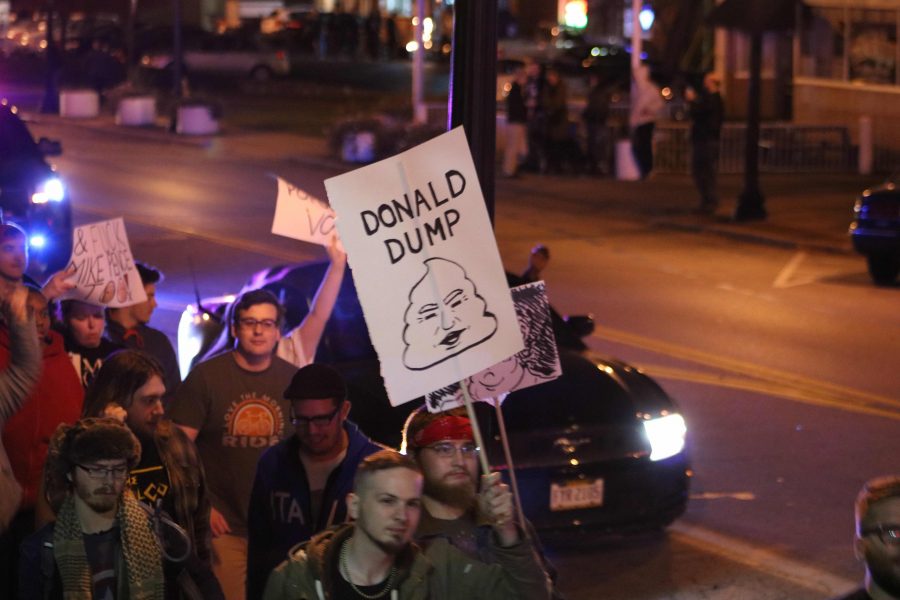 Demonstrators hold signs as they march down W. Market Street during the protest in Highland Square on Tuesday night.

On Tuesday night at 11:00 p.m., an estimated 1,100 peaceful marchers walked down the sidewalks of W. Market Street to vocalize their opposition to President-elect Donald Trump, the policies he has proposed, and the bigotry and fear that he has used and created to reach the highest political office in our country.

We gathered behind Chipotle in Highland Square, mingling with each other, enjoying the free hot chocolate and hugs provided by strangers on the sidewalk, and discussed why we were there. Some of us had voted for Clinton and were upset at her loss, while others had not voted for either candidate, but still opposed Trump’s views and his vision for our country.

As we began walking out of the parking lot and onto the sidewalks lining W. Market Street, there were a handful of counter-protesters holding signs supporting Trump, but they were peaceful and respectful of the marchers. Around 10 to 15 different police cruisers rolled alongside the protesters as we walked on the sidewalk. The officers kept traffic away and were ready to intervene.

Once we were all walking in unison, chants of “Love Trumps Hate” started from the front and spread back along the whole line of people. As we passed residences and businesses, people came outside and began to cheer with us and photograph the crowd. It wasn’t long before cars driving past starting honking and cheering, and some even rolled along with the crowd holding signs out of their windows. Soon, different marchers were trying to start different chants, and when one died out, another one in a different section of our line would begin. By the end, we all had lost our voices but not our enthusiasm.

We marched from Highland Square down to the McDonald’s on W. Market Street where we crossed the street and made our way back to where we began. When we returned to Chipotle, the megaphone was passed around and many organizers of the march and supporters gave their stories and accounts and told us why they marched, and kept the crowd pumped up for a good hour after the walking had ended.

This was the first political protest march I have participated in and it certainly will not be the last. The protesters ranged from college students to retirees. They included whites, blacks, Latinos, and Asians. There was a healthy mix of blue-collar and white-collar, and there were even a few families with kids that joined in as well.

Overall, I couldn’t help but feel proud of the turnout and the respect and dignity with which the protesters and the counter-protesters treated each other and the Akron police officers who escorted us. There was not a single instance of violence or aggression, and I believe that vocalizing our objection to a Trump presidency and mobilizing will help strengthen our credibility.

When people ask why we are protesting, I think we should remind them of this quote by Desmond Tutu, a South African civil rights activist: “If you are neutral in situations of injustice, you have chosen the side of the oppressor.”