International Day in the CBA 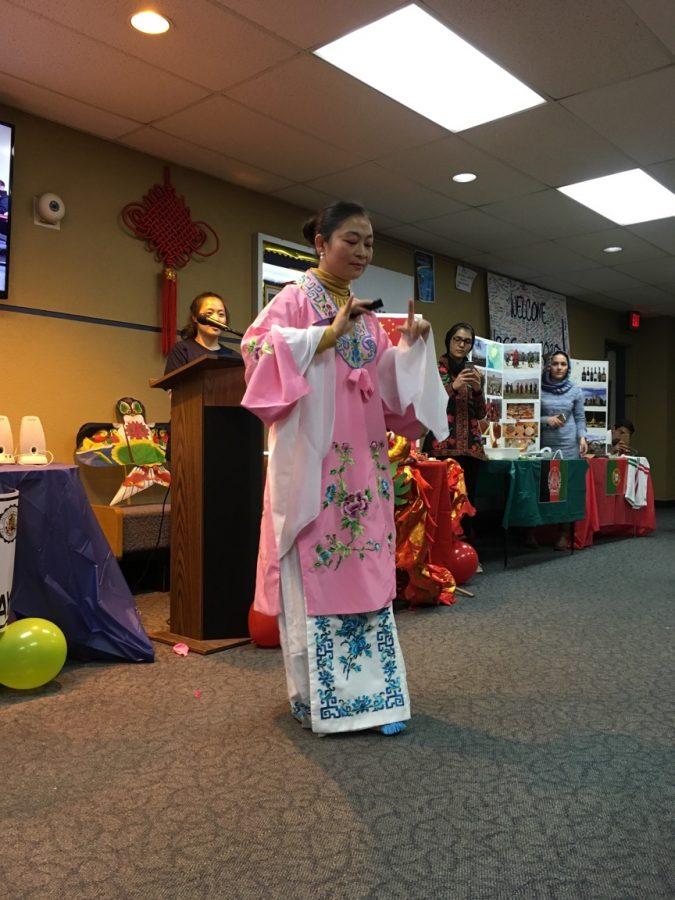 The woman's portion of a performance from the Beijing Opera.

Students passing through the College of Business Administration’s atrium yesterday afternoon might have been surprised to find themselves in the midst of so many different cultures.

The event was called International Day. Put on by the CBA’s Cross Cultural Association, it was a chance for students to set up a table and display their respective countries’ culture, traditional dress, popular foods, favorite sports, and more.

Throughout the afternoon were various performances of traditional dances and music as well, like acoustic renditions of Bollywood music from India, and the woman’s portion of a song and dance from the Beijing Opera.

“We have a very significant number of international students here in the CBA,” said Ravi Krovi, the college’s dean. “The goal of [the CCA] is to help students understand what are the cross cultural issues, so that they can develop the global mindset.”

Krovi referenced the many different flags hanging from the atrium’s walls. These, he says, represent all the countries from which CBA students come, including its 50 Fulbright students.

The countries at yesterday’s International Day included Thailand, China, India, Turkmenistan, Tajikistan, Egypt, Afghanistan, and Portugal. Here is some of what the representatives from each had to say about their native lands.

“People here only see what they think Afghanistan is like from the news, small and dark,” said Fazila Rahimy. “But the other side is so beautiful,” she said, pointing to a photograph of a verdant mountainside with a town underneath it. “Afghan people are really hospitable. They love to have guests, they love to cook, and are really nice.”

Rahimy also said Afghanistan is known for its handcrafted and uniquely-designed goods, such as earthenware and pottery.

Among other things, Turkmenistan is famed for its beautiful and intricate carpets, says Lina Haritonova. A rare breed of horse comes from this country as well: Akhaltekin horses, which are known for their speed, endurance and intelligence, and are also a national emblem for the country.

Turkmenistan is also a neutral country.

“I hope I will live to see the day ‘Tajikistan’ will be used as a synonym for ‘mountains’ by tour companies,” said a flyer on this country’s booth. Indeed, most tourists may come for the scenery and the nature, but will quickly find out that the essence of the country is in its hospitable people.

Although the independent Republic of Tajikistan is only 23 years old, its culture and civilization go back more than 3,000 years. The cost of living here is very low, even in the capital.

“There’s a bit of a stereotype about Egypt,” said Mona Moustafa. “We have a really rich history, but a lot of people still think we are riding camels and living in tents – but that is just not the case.”

Moustafa talked about the diversity of culture and religion in Egypt, which includes Muslims, Christians, Jews, and more. Its official language is Arabic, but many of the people speak English as well. It has one of the longest histories of any modern nation, whose first emergence as a nation-state came about 12,000 years ago.

Moustafa says one of its cities, Luxor, has a third of the monuments in the world.

The traditional Thai greeting is called “Wai,” where people, upon approaching one another, give a slight bow with their palms clasped together in front of their nose.

Rice, said the people working the table, is eaten for every meal in Thailand, which will almost always include something spicy as well. Nearly 94 percent of Thailand’s people are Buddhists.

“It’s not the biggest country, but it has many different areas,” said Goncalo Soares. “The beautiful beaches are also very important, and are all along the [Atlantic] coast.”

The food, Soares says, is Mediterranean, and the most popular dishes usually feature some preparation of codfish. Soccer is the most popular sport; while a very popular wine, Porto, also comes from Portugal. A “sad, deep music” called Fado is popular in the country, and is usually performed in restaurants rather than at concerts.

Soares added that Portugal has a very long history in discovering other countries and voyaging across the world.

India is incredibly diverse, with 22 official languages and 29 states. Some of its popular festivals include Diwali, the festival of light, and Holi, the festival of colors. Hinduism, Buddhism, Jainism and Sikhism all originated there, and the country is home to many Muslims and Christians as well.

Vivian Wan, who was working the table for China, said that most of Chinese culture is influenced by Confucius, and a high percentage of the people do not have any religious affiliation.

Different dialects are spoken in different regions, though the most common is Mandarin. The Cantonese dialect is prevalent in southeastern areas of the country.

Dragons, Wan says, are pivotal to most of China’s festivals and celebrations, as the ancient Chinese identified themselves as descendents of the dragon.