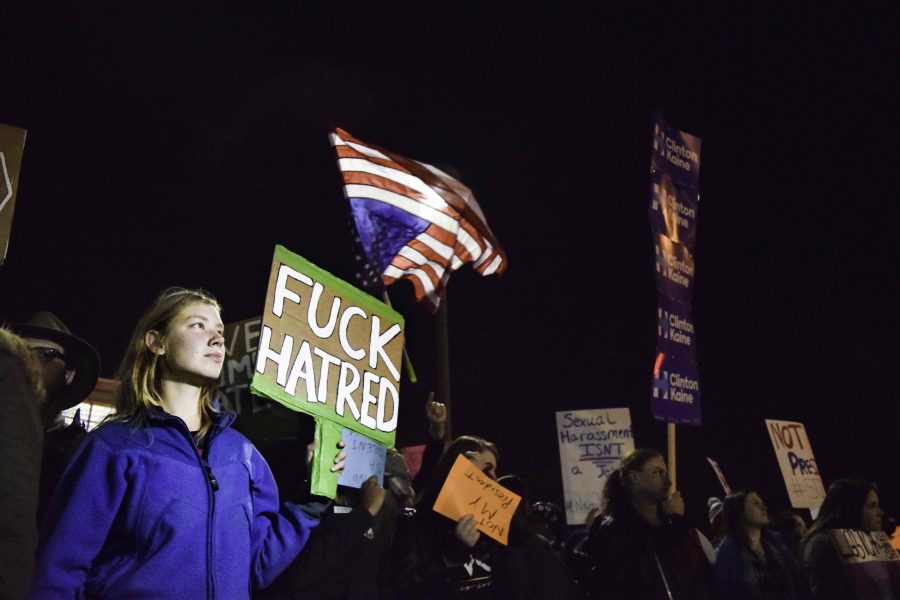 Demonstrators hold signs as they march down W. Market Street during the protest in Highland Square on Tuesday night.

Hundreds of people, including University of Akron students, gathered in Highland Square Tuesday night to protest against President-elect Donald Trump.

After meeting at Chipotle at 11 p.m., demonstrators began walking down Market Street toward campus at 11:30 p.m.

Overall, the entire protest was peaceful, with policemen and event marshals supervising to ensure no violence occurred.

“Love Trumps hate,” “Not my president,” and “This is what democracy looks like” were among the most popular phrases the protesters chanted.

Participants created a variety of different signs, some displaying anti-Trump messages and others promoting peace.

At the end of the protest, demonstrators took turns sharing their opinions while others stood around them in a circle. On the opposite side of the street, around 20 Trump supporters counter protested and yelled at the protesters.

Some of the protesters talked about their reasons for attending the demonstration.

Andy Martinez, a Kent State University student, spoke of the concerns for Trump’s proposals regarding immigration and the LGBT community.

“I’m here tonight because I see a lot of threats to our rights as citizens under the Trump presidency,” Martinez said. “I personally am part of the queer community and I have a lot of immigrants in my family. His stance on these issues are terrifying to me.”

“President-elect Trump ran his whole campaign rooted in hate and brought this out in other Americans,” said Akron resident Brittany Cherkes. “We’re here to stand up for those that might be afraid from the situation.”

Cherkes shares opinions with many of the protesters who believe Trump has made many controversial comments targeting specific groups.

“This is really important because there has been an injustice done – a racist, homophobic, and sexist person has been elected to the White House,” said UA student Nicholas Keaton. “We need to let people know that this will not be tolerated.”

While many protesters view Trump as unfit for the presidency, others think that the problem stems from the election process.

Joe Amato, an aerospace systems engineering student at UA, expressed a different opinion about the protests.

“I think that the protests are pointless,” said Amato. “[Trump] was elected through a process which our Founding Fathers created and it has worked for 240 years. I understand they are upset…but protests do not necessarily bring change.”

John Green: “Protests are common after a close and bitter election. And this one was an example of both. Motivated in part by disappointment and in part by fear, it is natural and often helpful for people to express their sentiments — in a peaceful and civil fashion, of course.”

Terry O’Sullivan: “Last night was a wonderful affirmation of American values of the Constitution. The First Amendment guarantees the right of free speech and the Constitution affirms the right to redress our government. These protests are fighting positions that are against the basic ideas of equality.”