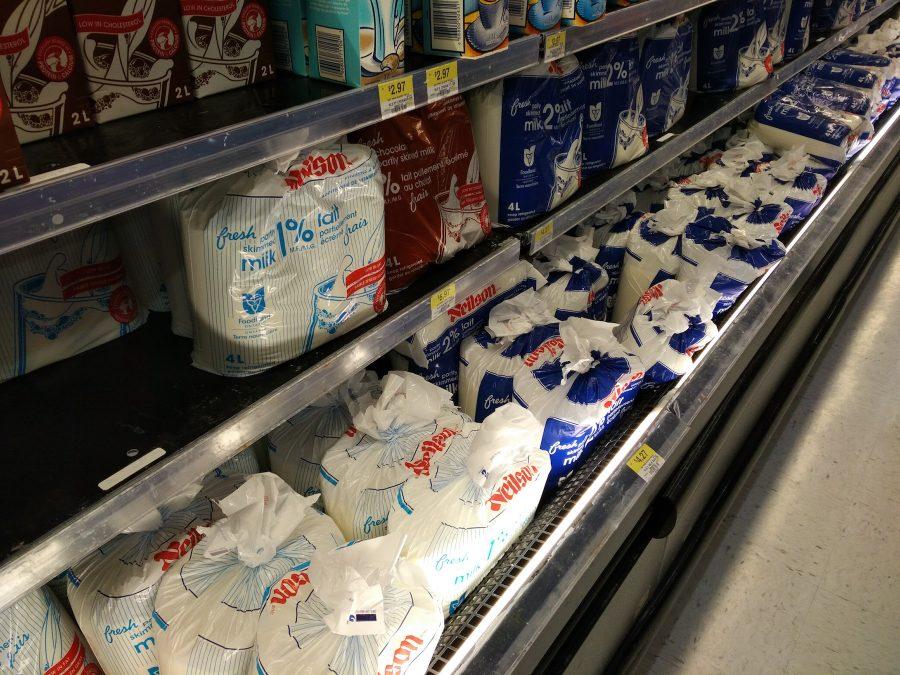 In Canada, your milk will come in a plastic bag.

While many are unhappy with the outcome of the election, some may be truly considering what they said about moving to our happy neighbour up north, Canada. Once a harmless joke, it’s now something you may be seriously contemplating. To keep the mood light, I will explain some interesting things you should know about Canada. I’ve been traveling to Canada to visit my Canadian stepmom’s family for over a decade now. These tips should make your transition smoother and make you seem like a real “canuck,” a non-derogatory slang term for a Canadian.

To start, you need to add a hearty helping of “eh”s to your vocabulary. If you’re not sure how to use the word, follow these guidelines: The word can be used to replace the phrase, “You know what I mean?” Americans might say something like, “Cold day, huh?” or “Cold day, right?” while Canadians might say, “Cold day, eh?” Practice it on your drive up north and you’ll sound like a true Canadian in no time.

Forget about Starbucks and Einstein Bros Bagels because now you have Tim Hortons. There are thousands of Tim Horton’s locations in all of Canada. According to an article on globalnews.ca, Tim Hortons outsells all other fast food restaurants including McDonald’s and it seems as though they are located on every corner. They have coffee, Iced Capps, hot chocolate, donuts, bagels, sandwiches, and soups. And if you really want to fit in, order a “double-double,” which is a coffee with two creams and two sugars. My favourites are Tim Bits – which are little, round donut holes but somehow more magical – Apple Fritters, and a vanilla Iced Capp.

Forget about football being your favourite sport. Now you like hockey and curling. In case you are unfamiliar with curling, it’s a sport where two teams of four players slide 40-pound rocks on ice to a target on the other end. The goal is to get your stone closest to the target. Do me a favour and look this up on YouTube – it’s quite mesmerizing. I can guarantee it’s one of the strangest sports you’ll witness. But with enough beer you’ll get pumped about it like you do with football. You’ll learn to enjoy “the game with the ice and the rocks and the sweeping and the yelling,” as one YouTube video describes it.

Canadians have a different word for restrooms or bathrooms. They call them “washrooms.” If you consider it, it makes more sense than saying restroom because who rests in there? And why say bathrooms if not all of them have a bath or shower. Americans are the real weird ones here.

Get used to your milk coming in a small plastic bag rather than a gallon jug because Canada is just plain weird. I was quite confused at a relative’s house when I saw them cutting the tip of a new bag of milk, like how you’d cut the tip of a bag of frosting, and place it in a pitcher. I was recently at a grocery store in Canada and had to stop to get a picture of all the bags of milk chilling in the dairy section. I clearly still don’t know how to keep my American concealed. And if you walk down an aisle looking for Kraft Mac & Cheese, that’s different in Canada too. It’s called “Kraft Dinner” but it’s the exact same thing. Also, be careful or you’ll get fat from Aero bars, chocolate with little melty air bubbles, and butter tarts, mini pies with sweet filling and nuts.

Everyone loves money, but Canadian money is 100 percent better than our currency. The bills are printed in different colors, like green $20 bills, purple $10 bills, and blue $5 bills. Also, they have dollar and two dollar coins, known as “loonies” and “toonies,” so don’t be alarmed when you get a giant handful of change. The coloured bills will be much easier to distinguish in your wallet, making your transactions speedier.

Canada does not have the same restaurants as we do here. One classic restaurant is Swiss Chalet, where you can order a quarter of a chicken, with your choice of white or dark meat, fries, and the most delectable dipping sauce your taste buds have had the pleasure of meeting. I can’t find a way of describing it. It’s not like BBQ sauce but it has some tanginess to it and it seems to have just the slightest hint of tomato.

You can find some unique flavours of Lay’s potato chips in Canada. I’ve seen some weird ones in the States, but Canada wins hands-down for strange flavors like Ketchup, Pickle (recently made available in the States), Swiss Chalet dipping sauce, and All-Dressed (all of the Lay’s chips flavors in one). They are all dangerously delicious.

I’m going to keep rolling with the food theme and describe a classic Canadian side dish called poutine. This dish starts with a load of fries and gets coated with gravy and cheese curds. The best poutine I’ve had in Canada was at New York Fries in a mall. I’ve also seen this dish available at McDonald’s, but if you want to be impressed or it’s your first time eating it, go somewhere a bit classier.

In Canada, the temperature is measured in degrees Celsius rather than degrees Fahrenheit. I was startled to see the temperature displayed outside of a business as three degrees and was confused why I hadn’t froze to death yet. Also, Canadians call warm winter hats “toque,” so use that and no one will know your American origin.

When you drive in Canada, the speed limit is measured in kilometers per hour instead of miles per hour, so if you’re driving a car from the states, you have to know the conversion. One kilometer is equivalent to about 0.62 miles. So if you’re driving about 60 mph, you’re going about 100 kph. Some cars have two gauges that show your speed in both kilometers and speedometers, so keep this in mind and don’t get arrested.

Lastly, Canadians add the letter “u” to many words like colour, neighbour, and favourite. And by adding “u”s in all the appropriate words throughout this article, I’ve conditioned you to be ready for your new Canadian life.