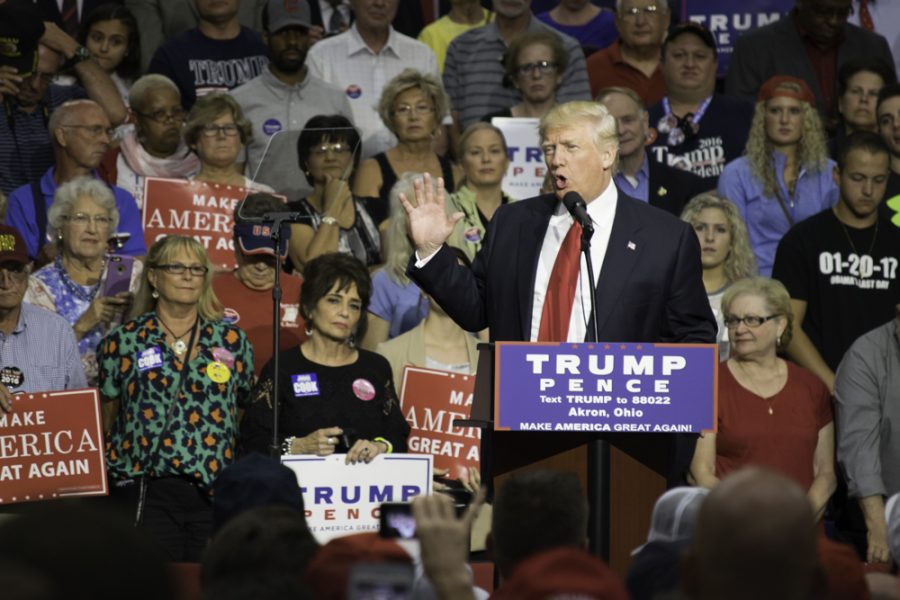 President-elect Donald Trump spoke during a rally on the campaign trail at the James A. Rhode Arena at UA this summer.

Students might be used to taking a class, learning information, then going out into the world to see how well it lines up with what they’ve been taught. Not often does it happen the other way around.

But that is the goal of UA’s Ray C. Bliss Institute of Applied Politics, which, only a few weeks after the presidential election, is registering students for a new spring 2017 course called “Trump’s Triumph.”

The course aims to analyze the 2016 election, with a specific focus on exactly how Donald Trump won, and why so many pundits, pollsters, and influential personalities got it wrong.

Headed by Matthew Akers, UA’s director of government relations and assistant director of the Bliss Institute, students will look at not only the policy issues of the election, but the role of the media, the influence of the pundits, the faultiness of the polls and, of course, the voters themselves.

“There has been lots of vitriol and anger on both sides of the issue, but, whether you support him or not, we want to simply look at: Why did 60 million Americans vote for Trump?” Akers said.

To do this students will mainly be looking at online and print articles, social media, videos, and various books.

“I’ve really been amazed at the number of books that already have, or are currently coming out, about the election,” Akers said.

Though the syllabus is still being refined, he is thinking of using “Hillbilly Elegy” by J.D. Vance, “The New Minority” by Justin Gest, and “Reclaiming the American Right” by Justin Raimondo, the latter of which would provide the intellectual underpinnings of the course, comparing Trump’s positions with those of conservatism throughout history.

Akers insists that the course would be valuable for any student, even “ideal for people who are not happy that he won,” as it will analyze a group of people and their beliefs “who are often forgotten.”

Senior political science student David Matheny, who is a Democrat, says he sees why the course is a good idea, but hopes that it does not focus too much on Trump while ignoring other aspects of the election.

“[The Bliss Institute] just had an American conservatism class this semester, and is now having a class on Trump. Are we going to have an American liberalism class too?” Matheny asked.

Hayley Cargill, a third-year political science student and a Republican who did not vote for Trump, thinks the course could be interesting, but says its title “sounds celebratory…because Trump won, [but] this isn’t a celebration.”

Akers, however, says it would help supporters and non-supporters alike understand this large portion of the American electorate which, till now, had not entirely showed itself, or at least was “not a part of the general conversation.”

“There are a lot of people who say, ‘I can’t believe this, how did he do this, I can’t believe 60 million of my fellow Americans voted for this guy, who I fundamentally disagree with on every issue,’” Akers said, “but the fact is that [he] won, and the reasons people supported him might be a little different than his [detractors] would think.”

The 400/500-level course is open to all majors, and will run on Wednesdays from 5:20 p.m. to 7:50 p.m. Akers says its format will be mostly open-discussion, with students spending the majority of their time examining and analyzing all facets of the election, including the main policy issues of foreign policy, immigration, and trade.