And the Lord sayeth: Let there be skate 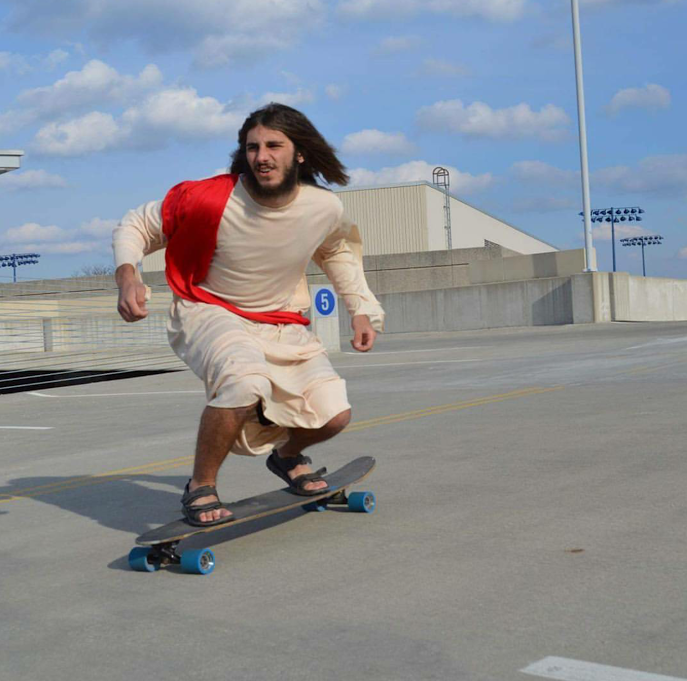 You hear it as you are walking across Coleman Commons: the whirring drone of skateboard wheels approaching in the distance as they steadily bear down on you. Clip-clip. The sidewalk segments interrupt the sound. Clip-clip. They’re coming in hot. Clip-clip. As you turn around to stand clear of the passing rider, a flowing mane of hair framing a beard of biblical beauty passes by with impeccable form. You smile to yourself, having been blessed by the presence and grace of Longboard Jesus.

The iconic longboarder of The University of Akron, Joe Gerin, has been carving the campus pavement since fall 2014, gaining near-cult status under the name “Longboard Jesus.” If you’re unfamiliar with the skateboarding saint, ask your friends. One of them has seen him, probably more than once. If the relevance of the nickname is zooming over your head, walk around campus until you swear you saw the Messiah riding by on a longboard.

Spring semester 2015 is really when people began to take notice of a tank-topped, tattooed longboarder cruising around campus. And social media took notice. The earliest incarnations of the mythos surrounding Gerin coalesced on Yik-yak, an anonymous “thought publishing” app. “Sightings” of Longboard Jesus became a regular occurrence on the app’s message feed around campus.

A friend of Gerin’s brought it to his attention, claiming that Gerin had become a local icon. Gerin, skeptical, read some of the dialogue about Longboard Jesus and realized it was indeed about him. Initially hesitant about his newly-bestowed nickname, he has since warmed up to it: “I wasn’t sure how to take it at first, but now I embrace it.”

The conversations on social media eventually spilled over into the physical world. Soon people were approaching him, asking for pictures, wanting to say hello, and talking to him about longboarding. Student writers and bloggers have requested photos, interviews, questions, and commentary. The students at UA noticed this warlock atop his majestic longboard, carving among us mere mortals, and they enjoyed it. Many students can gleefully relate a story involving their sighting of Gerin around campus.

Gerin documented his riding on Instagram, composing short clips and photos. As his reputation as sage-rider grew, a fan found his account and shared it on social media. Gerin’s Instagram account soared as followers shared his tag (@jmgerin) and viewed his longboarding adventures. “It spread like wildfire,” Gerin remembers. The legend continued.

Then on an October night, fall semester 2015, Gerin invited anyone who would show up to a longboard ride.

“Two people showed up,” Gerin recalls. “One was Bill Schulz. He wanted to learn how to skate better.” Schulz has recorded many videos of Gerin skating and posted them to his own Instagram account (@tdz9). Gerin says Schulz’s videos have a much higher production value than his own.

On Halloween 2015, Gerin acquired a Jesus costume. While the attendees at that party would glimpse their first officially vested Longboard Jesus, it wasn’t until February 2016 that the rest of Akron’s campus saw his holiest of longboarding. Gerin, dressed in his costume, made a day of riding around Akron’s campus, posing for photo ops and in general spreading absurd awesomeness wherever he went.

“I didn’t see a single person that didn’t smile when they saw me,” Gerin laughed.

That day has permanently cemented Gerin in the lore of Akron’s campus as Longboard Jesus. The photo is used and shared frequently on social media. And a cursory search of “Longboard Jesus Akron” will yield some humorous results.

But there is more to it than riding around and having a good time. Gerin has attracted the attention of several longboard companies from Florida and California that want him as a rider. Underground Longboards, from Florida, has invited him to a ride. In addition, Gerin says “the publicity from all this only made [him] a better rider.” He has made sure to learn new tricks and progress his skills. For now, however, he will focus on finishing his degree in business management at UA.

Gerin regularly gets invited to campus events like the recent Kanga Blue concert and enjoys attending basketball games. Upon graduation, Gerin wants to use his skills to get involved with a longboarding company before branching out and generating his own brand. Some CAD skills he learned his freshman year will help, he says.

Gerin has been riding longboard for more than 10 years. For the duration, he has rocked a Never Summer Swift, a board he describes as “very comfortable to ride.” Zumiez, a longboard store in Summit mall, has many customers that come in to ask about and discuss Longboard Jesus. Store Manager Taylor Brown, a former UA student, “appreciates [the] cool culture that he brings into our store. [He] does have an impact in the skate culture.”

For now, Gerin is having a very large impact on Akron’s culture. For those embarking upon finals week, Longboard Jesus has this heavenly wisdom to impart: “Be confident going into finals week.”