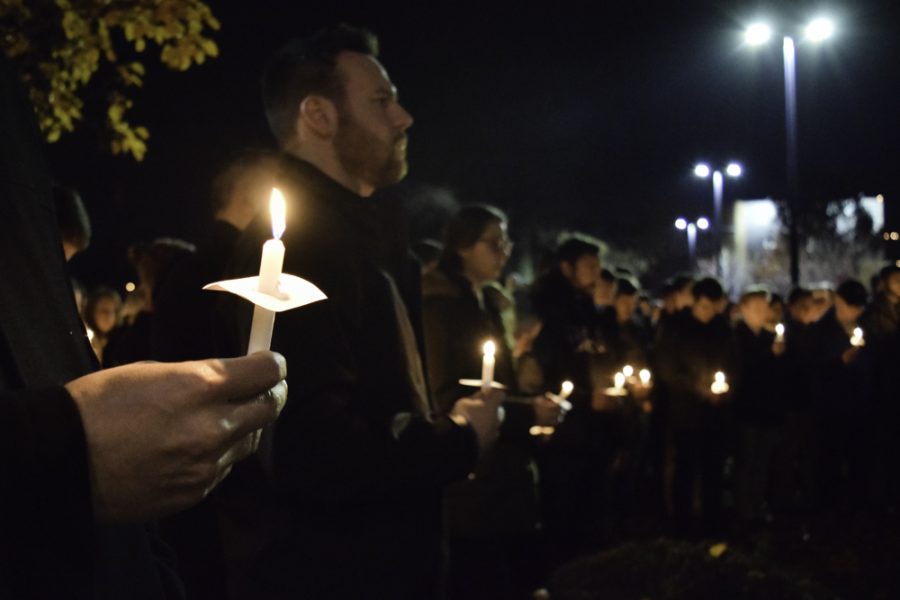 The Phi Delta Theta fraternity, of which Duncan Unternaher was a member, held of vigil in his remembrance last night.

This weekend, University of Akron student Duncan Unternaher passed away after being stabbed by his roommate during an argument early Saturday morning.

UA student Kendal Scheid will face charges of felonious assault and is currently in Summit County Jail, according to Akron police. The police report of the incident describes Scheid as a friend of Unternaher, who was also a “known alcohol user.”

After being held in critical condition at Summa Akron City Hospital, Unternaher passed on Sunday afternoon after being “placed on lung and heart assistance machines, where he courageously battled for his life,” according to a social media post from the Akron chapter of the Phi Delta Theta community, in which Unternaher was a member.

Along with this fraternity, Unternaher, a senior studying sales management, was involved in UA’s chapters of the American Marketing Association (AMA) and the Pi Sigma Epsilon (PSE) business fraternity.

Scheid was also a member of Phi Delta Theta.

“The University of Akron community is deeply saddened by this tragedy. University officials, including UA President Matthew Wilson, have been with his family and friends since the incident became known,” said a statement released by the University. “UA has offered its full support to the family and to his fellow students.”

UA will also provide grief counselors for students in need of help.

Phi Delta Theta held a memorial last night in honor of Unternaher for friends and loved ones to gather and pay their respects.

Tonight, a fundraiser will take place at Penn Station on Exchange St. from 5 p.m. until 9 p.m., where a percentage of all the proceeds will go to Unternaher’s family.

Those who wish to donate to his family can also visit bit.ly/2gw84pa.

Here are what students who knew Unternaher well had to say about him:

Duncan was lighthearted, filled with energy, and had a one-of-a-kind personality. He had a very unique style, and he was never afraid to speak up in class or at an event. Duncan will be missed because he truly lit up a room. No matter the circumstances he always had a smile on his face.

He was easily one of the most genuine, authentic, and kind souls I’ve ever encountered. He always engaged in conversation with anyone and everyone. His friendliness was not just felt by his brothers or friends, but by everybody he encountered. I know that I will miss his jokes, his very open and insightful mind, and his loving personality around the house. I was very lucky and blessed to know him.

“Duncan was an incredibly special person. It’s hard not having him here. He never knew a stranger. He would walk into a room and if he didn’t know someone, he would walk up to them and shake their hand and he would try to get to know them. The thing that made him different was that he remembered every conversation. He was a very philosophical guy. It’s really hard because he was just now finding himself. There never will be anyone that could ever replace him.”

“Duncan was my teammate, my classmate, and my friend. We sat next to each other in two separate classes. He was a very “happy-go-lucky” kind of guy, [and] had the type of personality that made it almost impossible not to like him.