The Buchtelite returns with a new model that consists of an online format and a new staff. 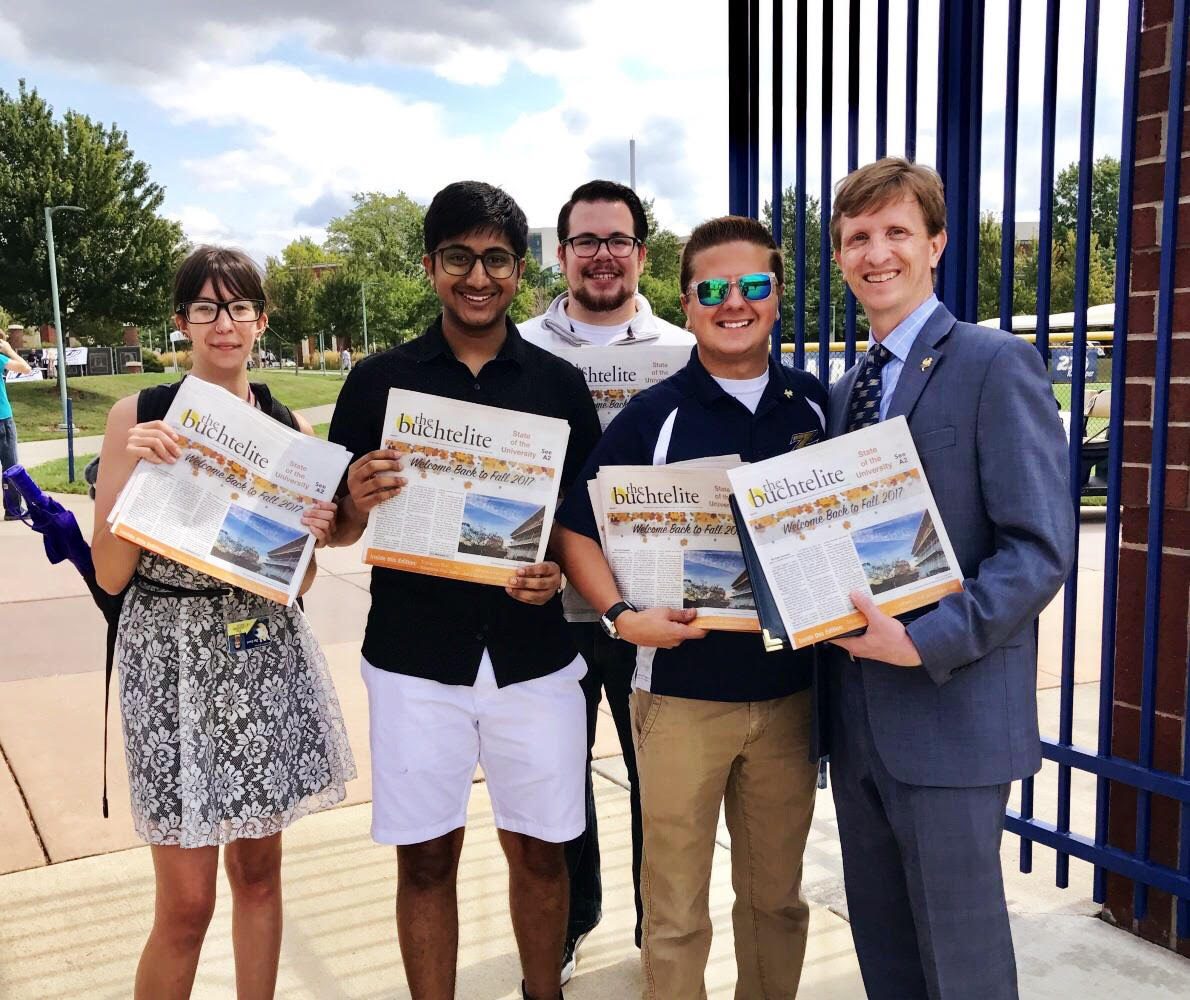 The Buchtelite, The University of Akron’s 128-year-old student run newspaper, is back with a new model after a semester-long hiatus.

The new model includes a primarily online format with the exception of several special edition print editions. The first special print edition being this issue.

The campus community will be able to find a copy of The Buchtelite on newsstands around campus starting the first day of school, Monday, August 28.

The Buchtelite’s hiatus was due to several factors. In an article called “Buchtelite to Suspend Publishing,” former editor, Grant Morgan, said that staff graduating or leaving and funding issues caused The Buchtelite to suspend publishing.

Since the hiatus, The Buchtelite has attained a new adviser, Julie Cajigas, a new editorial staff and a new sales manager.

Some of the new editorial staff include Jake Herron, the online editor, and Brianna Cramer, the social media editor. They have been revamping the online side of The Buchtelite in order to improve the success of the new model.

Herron said he has given the website a fresh new look. “This new user-friendly design gives our publication a clean, modern look that is more aesthetically pleasing for our readers than the previous version,” he said. The website is also designed to look better on mobile devices, which is how most of the readers will access the site, Herron said.

“The new Buchtelite gives readers the power to read stories as they are published at their convenience. They no longer have to wait until a paper is printed to get updated on the latest UA news,” Herron said.

Along with an updated online platform, The Buchtelite will also broadcast from several new social media platforms.

The Buchtelite is introducing two new social media accounts. These are Snapchat and a new Instagram account. They can both be found under the username @buchtelite.

“I think social media is really important for The Buchtelite now more than it was in the past because of our new primarily online presence. Since we’ll be posting most of our stories and content on our website, it’s important to have other outlets to promote the stories and to also create a bigger online community for The Buchtelite,” Cramer said

Cramer said she is most excited to use Twitter since it is her favorite social media platform, but she is also excited to experiment with Snapchat.

Not only can readers get news from The Buchtelite online and through social media, but they can look forward to a new email subscription system that will come out this fall.

Email subscriptions will allow readers to receive a special delivery of The Buchtelite each week as well as breaking news stories, Herron said.

In the meantime, the best way to keep up with The Buchtelite is to follow its social media and to check the website on a regular basis.

The former adviser for the Buchtelite, Dr. Val Pipps, is very pleased to have The Buchtelite back. Dr. Pipps, who helped create the new model for The Buchtelite said: “The campus certainly needs an independent voice to give students and faculty news of events on campus. With a new format, the tradition of students producing news can continue.” The current staff could not agree more.

Cajigas, who was also an integral part in designing a new model, said she is excited to see how the paper will grow and adapt with a mostly-online format.

“The free press is an integral part of any great university, and I believe wholeheartedly that a world where the importance of journalism in society is questioned, we need The University of Akron to graduate media-literate, well-rounded students who can navigate their world successfully. I’m grateful to the students who are bringing back this important campus institution at the time it is most needed,” Cajigas said.