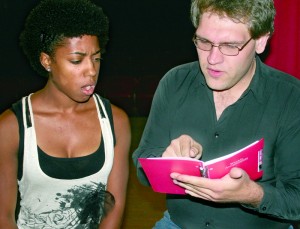 Beginning Sept. 22 through 25, “Almost, Maine” will be performed on The University of Akron’s campus by the Theatre Guild. The romantic comedy, set in the mythical town of Almost, Maine, is a play composed of several vignettes where couples fall in and out of love in the most ridiculous ways possible.

“Almost, Maine” was written by John Cariani in 2005-06. It originally opened as an off-Broadway production.

The play is directed by Miranda Roth. This is Roth’s first time directing.  She said that it was chosen for its simple, funny nature. “This play is more of a life goal, getting to direct and seeing something this huge come together, it’s something I’ve wanted to do for a while,” noted Roth.

“The people who came and auditioned really put themselves out there,” Roth said. And thus, it has made rehearsals energetic. The show’s cast is composed of nine couples, played by 11 different actors.  Roth praises them as being truly talented, hard workers who each bring his or her own ideas and insights.

Actor and President of Theatre Guild Alex Funk talked about his characters and his experience in the show. His two characters Chad and Daniel are both very different from each other. Funk said that Chad is more boyish and Randy is more mature. He is enjoying developing each character since both are so unique.

“It is a nice shift of dynamic for me,” Funk said.

As Theatre Guild president, Funk was also able to share the mission of the small theatre company.

“Our mission is to promote an active interest in theatre among students, faculty and the surrounding community, to ensure camaraderie among students interested in theatre and to engage in the production of plays and theatre events,” Funk explained.

“Almost, Maine” is the first production of the Theatre Guild’s season.

All shows will be performed in Daum Theatre located in Kolbe Hall. Conveniently, the play will run during family weekend.

“It’s a play that most everyone can relate to, perfect for people coming for entertainment, looking for something different on date night, or just looking for a good laugh! Also, all of the actors are students at the University who you can come out and support.” Roth said.