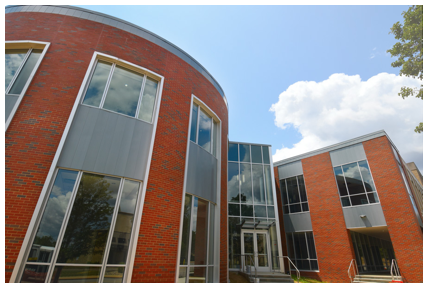 The C. Blake McDowell Law Center. (Photo courtesy of The University of Akron)

On Friday, Sept. 8, The University of Akron held a ribbon cutting ceremony to officially open their newly renovated law school. A crowd of about 250 people, including state officials and judges, along with students and faculty, gathered for the opening of the new C. Blake McDowell Law Center.

Before the cutting of the ribbon, Dean Christopher (C.J.) Peters, Jeananne Ayoub, and President Matthew Wilson spoke to the crowd. Peters thanked the donors who contributed to the renovations. “Individual success means little if it does not benefit the community around which the individual is a member,” Peters said. Jeananne Ayoub, a third-year student and the president of UA’s Mock Trial team, spoke to the crowd about the values of the law school: dignity and respect.

Closing remarks of the ceremony were given by President Wilson, who thanked the donors along with professors and students. Wilson said he expects enrollment to continue to increase, particularly the percentage of international students.

Renovations began in late 2015 and are completely paid for through the school’s savings and the help of 200 hundred of private donors. A result of this is around $10 million in interest savings and no tuition increase for current and incoming students.

In addition, more student spaces like study rooms, the Sufficient Grounds café, classrooms and student cubicles have been added to the Law Center. Improvements also include increased natural lighting in the building and updated technology in all class rooms, study rooms and the library. The other courtroom, The Lawrence A. Sutter, III Practice Courtroom serves as the main practice space for Akron Law’s Mock Trial Team. Sutter is an Akron Law alumnus who coached the school’s trial advocacy teams to four national championships and 18 regional titles. This room is now equipped with instant video playback so that team members may immediately review their actions in the room and look for areas in which they can improve. Dean Peters said trial advocacy is a point of pride for the School of Law.

The renovated building boasts two courtrooms, one of which is in the new 12,350 square-foot west wing. The new fully functioning courtroom is equipped with judge’s chambers and a jury deliberation room. Lia Evans, the director of alumni and development said, “local judges have already expressed an interest in holding trials in the new courtroom.” Dean Christopher (C.J.) Peters said, “more than half of the practicing lawyers in Summit County are alums of the law school.” Akron Law also has over 200 graduate judges.

Ryan Robinson, a third-year student at the School of Law, said what stands out the most to him are the renovations to the library and the added study rooms. “It is easier to find a room to work in,” Robinson said. In addition to the new study rooms, there is also an electronic scheduling system outside of each study room to manage reservations for the rooms. Robinson said the new look and feel to the law school is modern and sleek.

“The state-of-the-art technology in the new space supports the kind of preparation for law practice that students and employers expect from Akron Law,” Peters said.

When asked what the Law Center stands for in their eyes, Dean Peters said, “the building stands for the momentum of Akron Law.” Robinson said he sees it as the “crown jewel” of the University, “it is the newest law school in Ohio,” he added.

“With the support of our alumni and the legal community, the University has built something that will impact legal education in the area for decades to come,” President Matthew Wilson said.

The School of Law will be celebrating its one-hundredth anniversary in 2021.