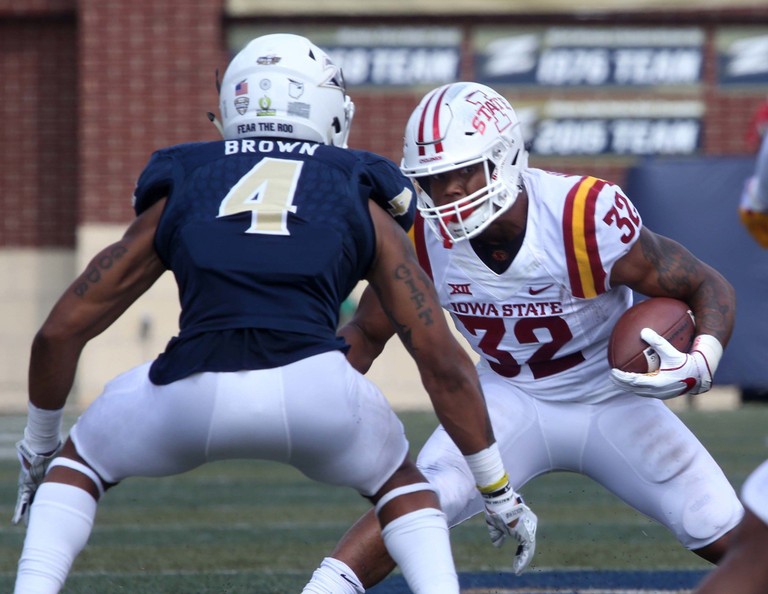 Many Zips fans left InfoCision Stadium-Summa Field disappointed after Akron’s 41-14 defeat, over 22,000 Akron Zips fans were in attendance at Saturday’s Football game against Iowa State. This made for one of the largest crowd turnouts in InfoCision Stadium history.

Iowa State built up a quick lead in the first quarter, after scoring two touchdowns within three possessions. The Cyclone’s running back, David Montgomery rushed for 27-yards in the first quarter. Quarterback, Jacob Parks, threw for an additional 68 yards along with a touchdown pass.

The Zips defense managed to hold Iowa State and forced the Cyclone’s to score only field goals. Suddenly, the possibility of Akron’s comeback looked likely. Especially after, quarterback Thomas Woodson completed two touchdown passes to end the first half 20-14, bringing a win for Akron within reach.

The Zips returned from halftime as a different team. During Akron’s second possession of the half, not only were the Zips forced to kick a field goal, at Iowa’s 36-yard line, but they also faced an offside penalty which forced Akron to punt the ball.

“We’ve got to make sure we don’t jump offsides,” Akron’s head coach Terry Bowden said during the press conference following the game. “We had a call to get them offsides, not jump offsides ourselves. There was no play. It’s called a freeze,” Bowden said.

The failed play marked the beginning of the Cyclone’s victory. As Iowa State’s quarterback, Jacob Park, followed the mistake by throwing a 43-yard pass allowing Iowa to score a touchdown and gain a 13-point lead over the Zips. Following the possession, Woodson threw an interception that was returned to Akron’s 16-yard line.

Akron’s defense appeared to be able to force another field goal attempt on Iowa, until a personal foul by Akron’s defensive back, Alvin Davis happened. Allowing Iowa’s possession to stay alive, just one play later the Cyclone’s Montgomery rushed nine yards to score a touchdown, creating a 34-14 lead.

The final touchdown for the Cyclones came after a 14 yard run from Park into the end zone, ending the game, 41-14.

“The difference was we made the mistakes,” Bowden said after the game. “We fumbled the ball, and we had an interception and that led to points for them and it got away from us.”

In lieu of the Zips defeat, Woodson is proving to fans he’s back and healthy. Despite being sacked five times during the first half, he completed the game 25 of 40 for 240-yards. Inching Woodson closer to making school history with his 42 career touchdown passes, trailing Charlie Frye by only 22 touchdowns according to Akron Athletics.

This weekend the Akron Zips travel to Troy (Ala.) to wrap up their non-conference games on Saturday, Sept. 23 facing off against the Trojans. Kickoff is set to begin at 6 p.m. ET on ESPN3.